One In The Eye For Former Defender 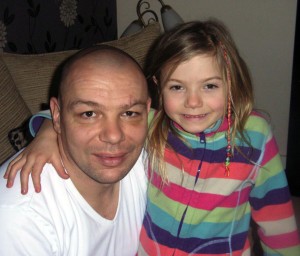 In more than two years as a Wolves player in the 1990s, Darren Simkin never missed a day’s training because of injury.

Just over a month before his 40th birthday, though, he has revealed how a recent mishap cost him a possible appearance in the National Fire Service Championships.

And the misfortune was nothing to do with the obvious perils of his job in the emergency services.

The local lad, signed from Blakenall for £10,000 by Graham Turner in November, 1992, was due to play for his ‘watch’ in the regional round of a national five-a-side tournament last weekend. But an attempt at some DIY put paid to his hopes.

“I was taking off a wardrobe door that opened right into the corner of the room,” he said. “I’m sure it would have been okay had it not been so tight for space but it fell and cracked me across the left eye brow and eye lid.

“To make matters worse, it had a point on it so I was left with a nice big cut. My wife works at the hospital, so I let myself in the back door and they stitched me – or rather glued me as they do now.

“It’s healing fine now but I’ve had some time off work and wasn’t able to play last weekend. And, as we lost, there won’t be the chance to play in the national finals.

“It’s ironic really because I was never injured as a Wolves player, although I had my fitness problems later on, especially at Shrewsbury.”

Simkin has been based at Walsall Station for the last four and a half years after serving for his first 18 months or so at Wolverhampton, his last game as a pro having come for Barry Powell’s Hednesford Town side in their FA Trophy final victory over Canvey Island at Villa Park in 2004.

After ending his 16-game Wolves first-team career by being sold by Graham Taylor to the Gay Meadow for £35,000 in December, 1994, he also played for Telford on loan, the Shropshire clubs being managed at the time by two more former Molineux stalwarts in Fred Davies and Wayne Clarke respectively.

Subsequent moves took him back to Blakenall for three years and to Stafford Rangers, with Turner and Ron Jukes trying and failing to sign him for Hereford along the way. 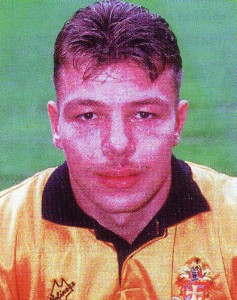 “There was no chance of being a fireman and carrying on playing at a good level,” added Simkin, who lives in Great Wyrley.

“I went into the service just after the Trophy final and they absolutely batter you in your three months of training. But it’s a great job – the second best in the world after football!

“I love it to bits, partly because the banter and teamwork are just the same as you would develop and find in a lively dressing room.”