Ex-Keeper Hopes To Be Back 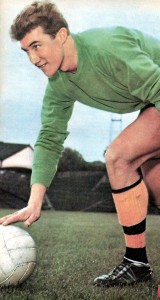 Fred Davies insists he has not called time on his long football career – despite turning 70 and being otherwise occupied throughout 2009-10.

The former keeper’s last calling in the game was as a scout for League One promotion chasers Swindon but opportunity hasn’t knocked for him this season.

“Circumstances change with clubs and I left because of a tightening of the purse strings at Swindon,” he said today.

“I was away in August and found that most jobs were filled by the time I got back.

“Because the weather was still nice, I was playing a lot of golf and am still doing so now. Even over the winter, I’ve been playing three times a week.

“I live right opposite the course I play at in Telford and the sporting part of my weekends is being dedicated to that rather than football at the moment.

“I never played a lot while I was still a player but I have been down to a handicap of seven in my time and am currently off 12.

“I’m playing in a senior open on Wednesday and having a warm-up tomorrow, so I’m not going to a football game this weekend either.

“Obviously, I’m old enough to be retired but I certainly don’t regard myself as finished work-wise.

“I still feel fit enough to be involved and occasionally see players I feel I could be some help to.

“There are people in management and coaching positions, though, who think you are after their jobs by expressing a desire to help.” 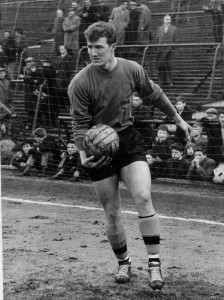 The young keeper preparing to guard his muddied goalmouth.

Liverpool-born Davies played 173 competitive Wolves matches from 1962 to 1967, having joined the club’s staff in the late 1950s.

Since continuing his playing career with Cardiff and Bournemouth, he has held a variety of positions in the game, notably manager stints at Shrewsbury and Weymouth.

His coaching appointments have included Norwich, Swansea and Birmingham.