A Wolves Line-up To Test The Best

Elite XI From Half A Century’s Viewing 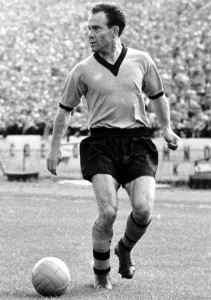 Express & Star columnist John Lalley, who is approaching the 50th anniversary of his first visit to Molineux, has become Wolves Heroes’ latest ‘signing’ and kicks off his contributions here by coming up with his favourite Wolves side from the different golden generations he has watched and savoured.

“It is the most pleasantly impossible dilemma to sit down and select the best Wolves 11 from the 50 years I have spent besotted with the club.

I literally am spoilt for choice with some exceptional talent to chose from – some of them players of the very highest quality. Peter Broadbent scored against Bolton in the first game I saw at Molineux in August, 1960. He is demonstrably one of the greatest players Wolves have ever fielded.

A team-mate that day was Ron Flowers, who, like Broadbent, stands alongside the likes of Billy Wright and Bert Williams as a player of true international quality. For me not to include Broadbent and Flowers would make no football sense, except that maybe when I first saw them, both had enjoyed their best days in a Wolves shirt.

Truth is, I’ve copped out and indulged myself by picking a couple of personal favourites alongside other players whose achievements in a gold shirt make them automatic selections regardless of the criteria.

No Steve Bull? Certainly, no player has made a more substantial impact on the club in the last 50 years. The fact that his scoring exploits occurred outside the top flight is irrelevant. He inspired the club’s resurrection from the precipice to oblivion and became a full international while doing so. His contribution is truly remarkable. He was and remains a Wolves icon but I simply cannot exclude Derek Dougan or John Richards to accommodate him.

How can I ignore Norman Deeley (pictured above right), Eddie Clamp and Malcolm Finlayson from my early days? And, talking of goalscorers, take a look at the terrific record racked up by Jimmy Murray.

My conscience is still pounding over the omission of Ken Hibbitt, a thoroughbred of a midfielder, magnificently consistent over so many years. And, from the current squad, Kevin Doyle is just about the best player I’ve seen at Molineux in the last 30 years.

Naming only 11 is an impossible conundrum but the memories in trying are priceless, so here goes in 4-4-2 formation:

MATT MURRAY: With any consideration of Murray, the natural conclusion is to bemoan his ill-fortune and speculate on what might have been but for sustained injuries. Better to recall his brief but brilliant contribution, climaxed by the best all-round season I have ever seen from a Wolves keeper (back in 2006-07). His reassuring dominance of his area, lightning reflexes and immaculate handling, underpinned by his towering physical presence, inspired an inexperienced Wolves team to the verge of promotion. His display at Norwich that season stands as the finest 90 minutes I have ever seen from a Wolves keeper. Heresy to suggest maybe but, had the fates been kinder, Murray possessed the attributes to have outstripped even Bert Williams as our best ever. 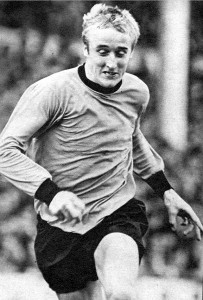 DEREK PARKIN: Essentially, Parkin was a right-sided full-back who played out most of his record number of Wolves appearances on the left flank. He was a fast, resolute defender who was sharp in the tackle for a relatively slight man. His consistency was admirable. He rarely suffered any dip in form while his outstanding fitness made him an excellent overlapping attacking option. He returned unfazed from a suspected heart condition, showing tremendous reserves of character and resilience that epitomised his long and distinguished career.

FRANK MUNRO: For a period just before and after our 1974 League Cup triumph, Munro was a peerless defender; strong, reassuringly powerful, yet blessed with superb football skills that gave him the confidence to constructively play his way out of difficulty. Hoofing the ball into row Z wasn’t Frank’s style. He trusted his ability and instinctive touch and the end result was pure class – not that he ever avoided confrontation. He had an abrasive streak all right and never backed down.

BILL SLATER: Dignified, calm and classy; all the attributes you would associate with a university lecturer – a vocation Slater excelled in alongside his career in top-class football. He was a constructive and versatile player who could tackle an opponent with shuddering power and determination. Physically imposing yet scrupulously fair, he was the master of understated commitment. His last game against Blackpool summed him up. After turning in a man-of-the-match display, he left the Molineux pitch without fuss or any show of emotion, because he felt that was the correct way to conduct himself.

GERRY HARRIS: In many ways the unsung hero of the successful Cullis era, Harris was a quick, all-action full-back, massively determined and cool under pressure. Like Parkin, his consistency was remarkable and he possessed a steely desire to win. I will always remember his performance in the famous 4-3 win over West Ham, the night before the bombshell of Cullis being fired. Undeterred by conceding an own goal, Harris responded with a one-man show of frenzied defiance, scoring himself to clinch an unlikely win.

MIKE BAILEY: Talk of Bailey and you immediately consider leadership. Undeniably he was a great captain but, first and foremost, he was a fabulous player. Built like a champion middleweight, he was inspirational, the midfield director of operations, the heartbeat of the team, crisp and accurate in possession and bitingly sharp in the tackle. His 1966-67 contribution during our promotion campaign is the best by any outfield player I have ever seen at Wolves. The moment when he lifted the League Cup in 1974 remains, for me, the best Wolves memory of the last 50 years and nobody earned that privilege more than Mike Bailey.

PETER KNOWLES: His unique departure from the game might lead to accusations that we exaggerate his true abilities. I don’t think so. Knowles was a highly skilled footballer with a deft touch and a burning desire to win. He could create and finish chances with sublime authority. Good in the air and supremely self-confident, he genuinely had it all. And, sadly, the best was still to come when he quit at 23. To have been denied the chance of seeing such a superb talent dovetailing with our super teams of the early 1970s is still an epic disappointment.

ALEX RAE: There have been better midfield players than Rae at Molineux but none who displayed more application and tenacity. He was a very tidy footballer – quick, snappy and belligerent, and an excellent distributor of the ball, with an eye for goal himself. He was absolutely inspirational in our ill-fated 2003-04 Premier League season, virtually waging a one-man war against impossible odds with a colossal appetite for work and a bloody-minded refusal to give up regardless of the situation. 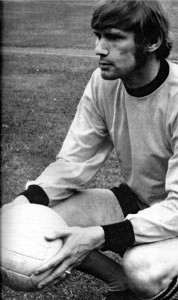 DAVE WAGSTAFFE: Since the glory days of the 1950s, no player has excited a Molineux audience more than Waggy in full flow. He could beat a full-back effortlessly and the precision of his sweeping crosses from the left flank created innumerable opportunities for our grateful strikers. He had brilliant touch and control and was a superb ball player, blessed with breathtaking natural skills. His artistry could unravel the tightest of defences and, very often, did just that.

JOHN RICHARDS: A supreme penalty box predator who, given just half a chance, was a match-winner. In his prime, Richards was a formidable striker, lightning fast with the intuition to find space and manoeuvre openings to his advantage. Always found the time and the inclination to tackle back and help his midfield colleagues when Wolves were under pressure. He was a real team player. His Wembley winner in 1974 epitomised the man; playing in pain with a serious injury, he delivered when it really mattered and the moment was ecstatic.

DEREK DOUGAN: Nobody, until Steve Bull arrived, has ever enjoyed such rapport and adoration with the Molineux crowd as this man. From the moment he announced himself with the famous hat-trick against Hull until his departure eight years later, he had the fans in the palm of his hand – and nobody could have relished it more. But he was a superb player too; quick, aware of channels and angles and deceptively strong and physical. He was magnificent in the air and a prolific finisher whose partnership with Richards was magnificent. He and Wolves gelled from day one. The memories will never dim.”