Heartfelt Thanks From Exiled Star

On Wednesday of last week (February 24), we were delighted to publish an email from Alan Hinton, written and sent by the Seattle-based former Wolves and England winger. It covered his formative years in the Black Country and his emergence as a first-team player at Molineux but broke off at the point where his career took a surprise twist. We promised readers an imminent part two  – and here it is, again in the player’s own words: 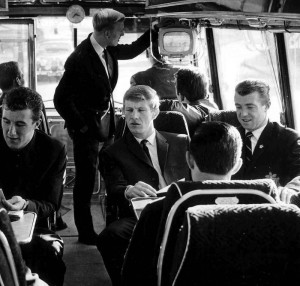 Alan Hinton, centre and facing camera, in transit with his Wolves colleagues in 1963. This photo is taken from Wolves In Pictures, published in association with the Birmingham Post & Mail.

“I was upset and shocked when Stan Cullis allowed me to go to Nottingham Forest in 1963-64.

When I was a youngster and Jimmy Mullen was so good to me, most kids wanted to play for the Wolves. Standards were high and, unfortunately, there was a lot of movement, with comings and goings most weeks.

I was quite surprised that Jimmy retired so early. It helped me come through, of course, but Jimmy could have played for at least another year. But I did not want to leave when I moved to the East Midlands.

Fortunately for me, Forest did well but Wolves, sadly, struggled. It’s a shame they did not keep very talented young players like  Terry Wharton and Bobby Thomson.

In 1967, Brian Clough and Peter Taylor took me to Derby County and built a great team. It was a pleasure to play for these energetic, inspirational guys. Dave Mackay was also a good manager there.

Our nine-year-old son Matthew died in 1976 from cancer and our happy life changed dramatically. We left for the USA the following year to see if the new lifestyle and opportunities would work for us.

In a 34-year spell, I have played in Dallas and Vancouver and been head coach in Tulsa, Seattle, Vancouver and Tacoma with much success, being named Coach of the Year twice. I never had a bad team.

I very much enjoyed having Wolves favourites Phil Parkes, Kenny Hibbitt, Steve Daley and Paul Bradshaw playing for me – all fine players and good people. And Tony Penman, who has lived in Wolverhampton for decades, was a superb chief scout for me for several years.

I became dear friends with Les Wilson and his wife Lois. Les still has so much love and respect for Wolves.

I built a youth programme called Crossfire that has seen hundreds of players into college soccer with scholarships.

Moving to the USA has worked out well for our family but I enjoy visiting my brothers and their families in Pattingham and Yorkshire, as I did a few months ago. They all support the Wolves, including our nephew Craig, who is the captain of Northampton.

I wish the club success as they play hard to remain in the Premier League. Marcus Hahnemann was my goalkeeper in Seattle and I sent him to England. He is a fine goalkeeper and a family man with good values.

To summarise, I loved my time at Wolves and remain so grateful for the amazing opportunity and coaching  I was given by such a grand old club.

Remember Wolves v Honved, Spartak, Moscow Dynamo and others? I was there as a very young kid with my mate Roy Morley. Sold-out crowds but the fans took care of us. We were in good hands. 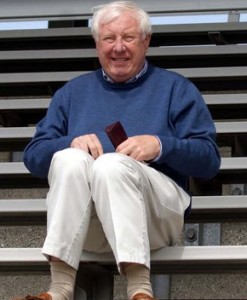 The 'Wednesbury Boy' in recent years.

To Wolves, as a club, and to the fans, thank-you for giving me my big opportunity.