Bull And Mutch Together Again 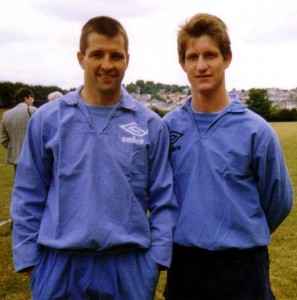 The way they were......how opponents preferred Bull and Mutch: in their training kit rather than the gold and black of match day!

Steve Bull and Andy Mutch are to link up again almost 17 years on from their last appearance together in Wolves’ attack.

The phenomenal strike duo totalled more than 410 goals for the club between them and now feature in a ‘Pure Gold’ evening at The Raven pub, Quarry Bank, next month to regale supporters with tales of their exploits for Graham Turner’s side and various England teams.

The event, on Thursday, April 8 (from 7.30pm), brings the pair together for the first time in this format, both having managed at good non-League level as part of their post-playing careers.

Promoters Midlands Memorabilia are offering tickets at £10 and have also secured an appearance by Mark Burke, one of their team-mates in the early 1990s as well as a star of the successful Wolves Masters side in much more recent times.

For an extra £5, fans will receive a flyer, a Steve Bull Now & Then dvd and a 9in x 6in photo as well as a ticket to the evening.

The players will be available throughout the event for answering questions, signing autographs and posing for pictures.

Any enquiries about arrangements should be directed to Danny Drewry – by email to info@midlandsmemorabilia.com or phone on 07882-644832.

“We’ve called the evening ‘Pure Gold’ and expect it to be full of nostalgia and reminiscences for Wolves fans,” Danny said.

“It’s our first Wolves evening and we’re delighted to be working with such big names from the club’s past. 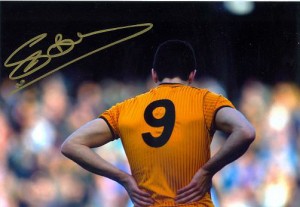 Tickets for Pure Gold are available on-line at or from behind the bar at The Raven, where raffle tickets will also be sold from.

For a more detailed look at the work of Midlands Memorabilia, please click on the icon in the adverts area to the right of this page.