A Laurie Load Of Posts!

California-based Charlie Bamforth used his recent conversation with Jimmy Melia to ask the whereabouts of a former Molineux reserve who is also resident in the United States. Here is his follow-up story. 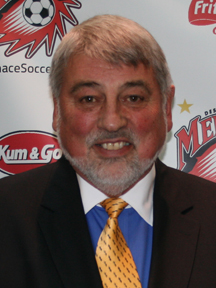 “I was a Baggies fan. I wanted to be a professional footballer but I vowed I would never play for the Wolves!”

What else would you expect from the son of a man who played and then scouted for West Bromwich Albion?

Laurie Calloway, raised in the Black Country in Blackheath, played for Staffordshire schoolboys as a goalscoring midfielder and was on Albion’s books as a 14-year-old, playing in the fifth team in the Warwickshire Combination.

Having returned from a two-month absence with a damaged right ankle, he started playing for a youth side called Queens Colts.

“We were up for a cup final and I got a call that morning from West Brom, who were short for their fourth team,” he recalls. “I didn’t know what to do but my dad had no doubt despite his allegiances. He said: ‘Play in the cup final. Albion must have known about this earlier in the week and have left it too late’.

“Wolves scout Billy Westwood was a friend of my dad and the next time they held trials, I went along. They offered me an apprenticeship. Funny, isn’t it? Despite all I had said before, it was a case of ‘where do I sign?’

“Jack Dowen and Joe Gardiner were on the training staff. Bobby Thomson and Ted Farmer would give me lifts to training and I was best man at Bobby’s wedding.”

Calloway wore the no 11 shirt in the team who reached the final of the 1961-62 FA Youth Cup, losing narrowly to Newcastle.

“I was probably closest to Alan Attwood,” he added. “I was a fairly high-scoring forward in the Midland Intermediate League – on the left because I was left-footed. But Stan Cullis said ‘you’re not going to make it as a flippin’ forward, I’m going to make you into a floppin’ fullback’. He never swore. I wasn’t going to argue, so I played most of my career at left-back.

“Cullis was not about to put me into the first team as the likes of Thomson, George Showell, Gerry Harris, and John Harris were in the way and they loaned me out to Rochdale with Tony Collins. Of course Stan got the bullet – and they forgot all about me!

“For four years, I played most of Rochdale’s Fourth Division games. On Tuesdays, we would play closed-door friendlies against Blackburn and one week we won 3-1 at Ewood, with me scoring two goals from left back. Come transfer deadline day, Keith Newton was lined up to go to Forest, so Eddie Quigley came for me as the replacement. But Keith’s missus didn’t fancy Nottingham and the transfer fell through. So now there’s an extra full-back on Blackburn’s books.” 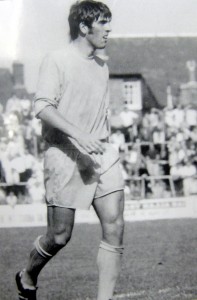 Plying his trade in Lancashire.......

Actually, the signing was not quite so simple. “The secretary at Rochdale said: ‘Hang on, Calloway is not our player!’ They got on to the Wolves secretary Jack Howley and he said: ‘You’re right, he’s still ours.”

The ₤25,000 transfer fee was eventually divided between Rochdale and Wolves, Calloway stepping in 25 times to deputise for either Newton or Billy Wilson.

But he was otherwise in the reserves, including the game at Blackpool in which visiting keeper John Barton (my mother taught John – Charlie) injured his elbow in the first half. Calloway went in goal and Barton played on the left wing in those pre-substitute days. There were no goals.

“I got disgruntled at Ewood because I thought I should be in the team, who just missed out on promotion. So Quigley swapped me for Alex Russell of Southport. Peter Withe was an amateur there. We played Scunthorpe and won 5-2 – he scored three, I got the other two from left side of midfield. Ray Clemence was in goal for Scunthorpe and Kevin Keegan scored their two goals.”

The next move, to York, was not a successful one. Laurie’s mind was in a whirr when his wife was diagnosed with a serious illness but there was the highlight of beating Nobby Stiles’ Middlesbrough at Ayresome Park in the FA Cup, Calloway notching the winner. Then it was to Shrewsbury with Maurice Evans.

“I put the ball in the river there a lot,” he added. “Graham Turner was at centre-half.  I came on loan to San Jose Earthquakes and, when I got back to Shrewsbury, Alan Durban was the boss.

“The Earthquakes wanted me back but Shrewsbury said it was to be permanent or nothing. So I became the first overseas player signed for a transfer fee in the US – 25,000. I can’t remember if that was pounds or dollars but what a marvellous experience! Playing against the likes of Pele, Cruyff and Best. I was never going to do that in England.”

Laurie, now 64, was in San Jose for four years before his playing days came to an end at 34. His first coaching appointment was with Southern California Lazers. “I got the job ten days before the start of the season. They asked if I minded them bringing in a fellow from England who could bring some players with him. It turned out to be Jimmy Melia. I said: ‘Sure, I used to play with him and clean his boots’. Actually, I didn’t. I was a bit older but I did use to clean Ron Flowers’ boots and it felt like an honour. 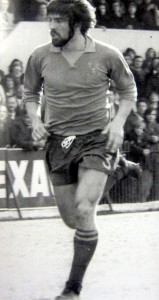 Back in the Midlands alongside Graham Turner at Shrewsbury.

“It was a good cop, bad cop thing and Jimmy taught me a lot. We had a bunch of rag tags from England, but also Rildo, the Brazilian international. He had an emotional interest in being in LA, so came to play for very little money. He owned plenty of apartments at Copacabana, so he didn’t need the cash.”

The Lazers folded and Calloway’s next stop was to take over from the former Liverpool full-back Peter Wall at California Surf before heading to live in the wine town of Lodi and coach in Stockton. Then Seattle Sounders went calling.

“They wanted a replacement for Alan Hinton,” he added. “He had taken them to the final and a game against the Cosmos but got fired.  Why me? Maybe they knew I was a big advocate of bringing in young American talent rather than older overseas-based players.”

The Sounders folded after two years – it was the start of the demise of the NASL – and Calloway left behind the professional game to start again in youth development before moving on to Salt Lake and then San Francisco Blackhawks.

He led the latter to a national title, then joined San Jose Clash before, in 1997, stepping away from the game and following his second wife into the restaurant trade.

His wife had itchy feet, though, so it was back to football with Des Moines. Then came Syracuse and an expanding franchise but they folded and he took an appointment in Rochester.

“There was an ownership change, a guy who wanted to run things on a shoestring,” he said. “I had the second top salary, so I was let go. I stayed in the area and developed Calloway United Soccer Academy, which my wife is still running.” 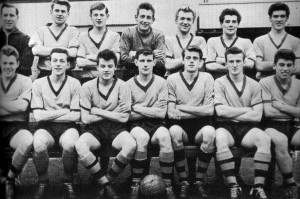 But Des Moines called again. Laurie had enjoyed an unbeaten season there first time round and their academy was now in disarray. “They asked for recommendations of people they might approach and I gave some but none of them worked out. So they said: ‘Might you be interested?’ I flew in and negotiated in November for three weeks. And I have been here since.”