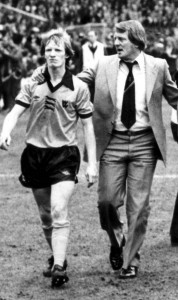 When John Barnwell became Wolves’ manager in 1978, he joined a club facing a relegation battle.

Immediately, though, he turned fortune on its head, kept them in the top division and gave us an unlikely FA Cup semi-final appearance against Arsenal, a club he had served with distinction as a player.

The Gunners easily repelled the Wolves challenge at Villa Park but Barnwell had laid the foundation for the following season – a campaign that ranks as the most successful at Molineux over the last 30 years.

To finish sixth in the First Division represented startling progress but to climax the revival with a Wembley triumph in the League Cup was a remarkable achievement.

Just 11 months before the joy of that cup final, Barnwell had suffered life-threatening injuries in an appalling car crash. Remarkably, against all speculation, he returned to management with his characteristic chirpiness, good humour and optimism.

With his assistant Richie Barker, whose role in this era of brief success should never be underestimated, Barnwell recruited the Liverpool veteran Emlyn Hughes during pre-season and then, in early September, sensationally shattered the British transfer record by paying Villa £1.5m for striker Andy Gray.

The transaction was funded almost in its entirety by Steve Daley’s ill-fated move from Molineux to Manchester City, and interest in the club soared.

Gray started like a runaway train; all towering headers, flying elbows and boundless enthusiasm and energy. He helped himself to four goals in his first three games – victories against Everton, Manchester United and Arsenal. It was a breathtaking introduction!

Hughes and Gray were two outstanding footballers and undeniably both of them enjoyed the greatest moments of their careers away from Molineux but this single season was about to make their short association with Wolves more than worthwhile. 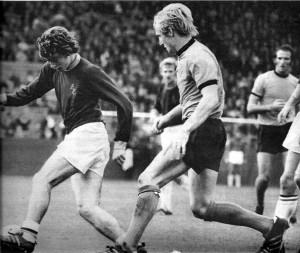 Dave Thomas tests Derek Parkin at Turf Moor in 1970. But the winger surprisingly flopped when brought to Molineux.

Later in the season, Barnwell, happily over his harrowing ordeal, thought he had completed the jigsaw by signing the England winger Dave Thomas from Everton.

It seemed like great business at the time. Thomas was lightning fast, tricky and creative, and the prospect of him providing ammunition for an on-fire Gray and the still formidable John Richards was mind-boggling.

In reality, Thomas endured nightmares at Molineux. He was unable to find even a vestige of form and soon drifted out of the team into oblivion. It was a real shame and even now it’s hard to fathom why it all went so sour for such a good player.

With the season barely started, the League Cup was under-way. For obscure reasons, second-round ties were fought out over two legs and, after drawing at Turf Moor, Wolves comfortably dismissed Burnley at Molineux in a low-key affair that hardly stirred the pulses.

Full-back Geoff Palmer somehow scored in both games but, in truth, little major interest was in the air despite the keen affiliation many Wolves fans had with this competition after the success of 1974. In fact, our path to the final was hardly littered with memorable clashes.

The best performance was the 2-1 win at Crystal Palace in the third round. Palace, under a confident Terry Venables, were being dubbed ‘the team of the eighties’ by some of their manager’s cohorts in Fleet Street and Wolves winning at Selhurst Park was certainly not to their liking. Clearly, it annoyed El Tel too. Within weeks, he left Palace for QPR.

In the quarter-final, Wolves took three matches to see off a spirited Grimsby, who had beaten Everton in a previous round. 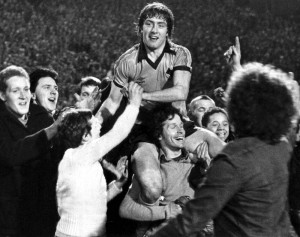 John Richards is chaired off Molineux after scoring one of the goals with which Wolves overturned Swindon's first-leg lead in the 1980 League Cup semi-final.

And the semi-final, over two legs, saw them struggle big time to pip Third Division Swindon – and the feeling of relief at Molineux after scraping home 4-3 on aggregate was clearly evident.

Our opponents at Wembley, Nottingham Forest, beat a great Liverpool side in a titanic semi-final and so booked their third consecutive appearance in the final. They were short-odds favourites to make it three wins in a row.

Promoted with Wolves in 1977, they had then left us and just about every other club in their slipstream. Astonishingly, in their initial year back in the First Division, they had won the championship and then fabulously added the European Cup to sit alongside their domination of the League Cup.

Their transformation from obscurity to domination had been remarkable and, at the centre of it all, swaggered the eccentric genius that was their manager Brian Clough.

For those not around at the time, it’s almost impossible to recount the towering public profile he exuded. He transcended football; his deliberately outrageous opinions had the media fawning upon his every word with a mixture of awe, trepidation and deference, the like of which is usually reserved for a reigning monarch.

Clough was virtually able to ‘name his price’ as a TV pundit and would then proceed to offend whoever he liked with brazen impunity. He could be boorish, lavatorily crude or cuttingly critical one moment and charming, perceptive and side-splittingly funny the next.

Back in 1980, in his pomp, he quite simply was ‘Mr Football’ and just about Mr. anything else that took his fancy; and he gloried in his role as miracle worker.

Alongside him was his equally egocentric sidekick, assistant Peter Taylor. Neither for an instant possessed one iota of doubt that Barnwell, Barker or Wolves would stand in their way. We would be chewed up and spat aside like their previous opponents – Clough’s monumental ego demanded no less. 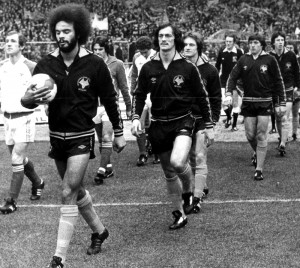 The big entrance: No sign of Cloughie - and Peter Daniel is probably shadowing John Robertson.

As a beaming John Barnwell led Wolves out at Wembley, resplendent in his best suit and as proud as punch, Clough showed his disdain for what to him was the routine of just another final. He allowed trainer Jimmy Gordon to lead out the star-studded Forest outfit.

All cameras trained their lenses towards Cloughie when he emerged from the tunnel and sauntered confidently to the dug-out. He was sporting an open leather coat, so his trademark green goalkeeper top was visible to his expectant audience.

Cup final conventions and etiquettes were not for him. He was a deliberate picture of non-sartorial elegance. But, as he made his theatrical stroll to the bench, the Band of the Queen’s regiment struck up their rendition of ‘Hi Ho Silver Lining’ – later to become a Wolves theme song. It was a hint maybe that this might just be the day of the underdog.

As for the game itself, it was no great spectacle, but it didn’t lack for drama. Barnwell outflanked Clough in one significant area. Peter Daniel was deployed to shadow the manoeuvres of danger man John Robertson on the Forest left wing.

It worked a treat, as did Daniel’s long ball in the second half which caused the fateful Needham/Shilton collision that left Andy Gray with the ultimate in open goals gaping before his very eyes. From the terraces behind the goal, we saw Emlyn Hughes and Willie Carr throw up their arms in celebration before Gray’s left foot applied that memorable finishing touch.

I swear that, exactly as it had done six years earlier when John Richards’ winning shot hit the net, time stopped for a delicious moment. It was an ecstatic experience. And then almost immediately, came the awful realisation that there was so much time remaining. The prospect of getting this far and not winning was panic-inducing. 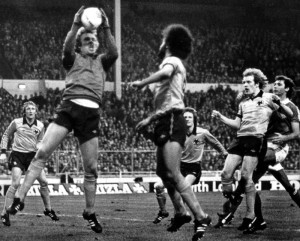 From then until the end, it was like The Alamo. Our goal led a charmed life, although keeper Paul Bradshaw never had to go to the extremes of sustained brilliance that his predecessor Gary Pierce unveiled in 1974.

Even now, 30 years on, when I savour the DVD, I still expect Forest to score. But they didn’t and, when the final whistle mercifully sounded, Robertson was appropriately in possession, with Daniel eyeballing him and jockeying him to the touchline, nullifying his threat to the last second.

The battle was won. And then, bedlam! Cue celebrations that were even wilder than six years previously. Up the steps, Hughes was hugged by our chairman Harry Marshall as he collected the cup.

My mind flashed back to’74 and the haunting look of misery on the face of Peter Swailes, the Manchester City chairman, when Mike Bailey lifted the trophy skywards. Wembley is no venue for losers, even for the Brian Cloughs of this world. 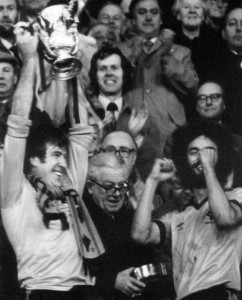 The crowning-glory moment of a great day.

A last word for the captain……Emlyn was a Shankly-inspired Liverpool Red. But I’m glad to recall that, not long before he died, he was among a group of former Wolves players paraded to the fans at half-time during a Molineux fixture.

He was given a fantastic reception that clearly delighted him. The characteristic beaming smile lit up his face as he waved in appreciation. For the fans and no doubt for Hughes himself, memories of a special Wembley occasion flooded back. It was magical, I promise you.