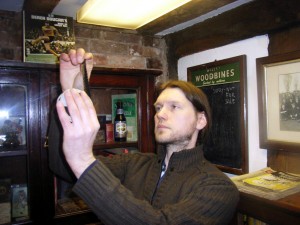 Wolves Heroes have splashed out by buying the valuable photograph and cine film collection amassed by the club’s former chairman John Ireland.

Our attention was drawn to the magnificent haul last month by an Express & Star article featuring the Wolverhampton Books & Collectables shop in Victoria Street.

The write-up referred to the scenes Ireland filmed on the club’s tours of South Africa in 1957 and the Caribbean in 1964, as well as around 200 pictures he took on those trips and in the USA and Canada in 1963, America in 1967 and 1969 and various other overseas locations.

“It was described as a treasure trove and we thought it was too good an opportunity to miss,” said Wolves Heroes’ creator David Instone.

“We plan to use some of the photos in due course on this website and there’s also the likelihood we might use a lot more of them in future books about the club.

“By purchasing the collection, we feel we have given more supporters the chance to see and enjoy it rather than it be bought by one or two people who may not have the same chance of showing it off.

“But we have no intention of hoarding it. Our plan is only to ultimately make the material accessible to fans by displaying it on line or in other publications.

“If any individuals are keen to buy the originals, they should contact us. The photos will not be expensive, though there will be a charge for converting them from slides and it will take quite a time for us to sort through them. There must be 200 of them in addition to the reels of film and we’re busy researching at the moment where they are taken and who is on them. 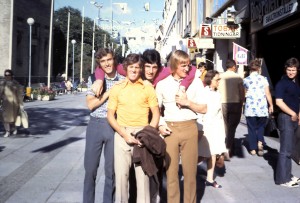 From left, John McAlle, Bernard Shaw, Phil Parkes and Derek Parkin during a tour of Scandinavia.

“There is some wonderful stuff…….players, management staff and directors at leisure on trips to faraway places as well as shots taken on match-days. And there are a few photos of the Wolves and Chelsea players together in the West Indies in 1964.

“The only photos we don’t have are those that were published by the Express & Star, which are on sale at Wolverhampton Books & Collectables. The ones we have are different, though in many cases they are from the same tours.”

Anyone interested in learning more can email us on info@wolvesheroes.com or ring 07734-440095.