Every so often, we are happy to take a look at the more distant Molineux past, or at how Wolves made headlines of a gentler kind, which is definitely the case with this tale from the club’s ground-breaking trip to Russia in 1955.

It wouldn’t pass for news in today’s more sensationalised times but the Daily Express devoted 14 paragraphs of precious space 55 years ago to a game that had nothing to do with the main purpose of Wolves’ adventure behind the Iron Curtain – the games against Spartak and Moscow Dynamo.

In between the two fixtures, several of the dignitaries in the travelling party took part in a leisurely kickabout in a park, not knowing it was going to be committed to print back home.

But colourful Daily Express sports reporter Desmond Hackett was among the Englishmen pressed into action against what he grandly called a Rest of the World side after they disembarked a luxury cruiser on the banks of the Volga.

“Our Russian hosts saw some boys and girls playing handball,” Hackett wrote. “One shouted: ‘Now we all play at football – show us your braces,’ which is the Russian equivalent of ‘Let your hair down.’

“Coats went down for goalposts, ties came off and the Russians stripped to the waist. One wore only shoes and baggy underpants.” 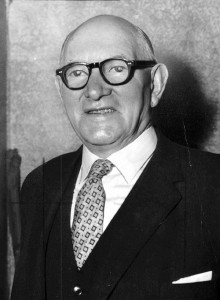 Hackett also took his place in the line-up and recorded the fact that 62-year-old Wolves director Jim Marshall went in goal but defected to the other side, so the sun wouldn’t be in his eyes!

Express readers were told that it was a case of twice knightly – Sir Charles netting a brace – as the visitors won 3-1 in front of an audience that swelled to about 100.

“Flowers were given to the England team at the end and Billy Wright and Bert Williams formally congratulated us,” he added.