Bobby Blown Away By Doyle And Wolves 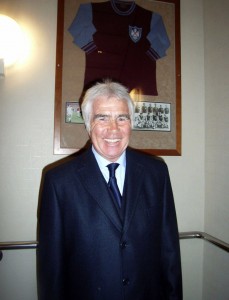 Bobby Gould has given a resounding thumbs-up to Wolves’ survival prospects after his work travels took him to the games at Aston Villa and West Ham this week.

The former striker, who had two prolific spells at Molineux in the 1970s, was on TalkSport duty at Villa Park five days ago, then meeting and greeting in Upton Park’s corporate areas in midweek.

And he has seen enough to convince him that Mick McCarthy will successfully complete the survival mission in the coming weeks.

“I get on really well with Mick – we used to see plenty of each other when we were both international managers – and had a quick word with him in the corridor at West Ham,” he said.

“I wondered how people could speak so highly of Kevin Doyle when he hadn’t scored that many goals but I can now see what they meant.

“He has been absolutely terrific in both matches. I was really impressed and think Mick has got a major talent and asset there.”

Gould invited Wolves Heroes along as his guest at Upton Park as our sister company, Thomas Publications, are ghost-writing and producing his autobiography later this year.

And the affection in which he is held at another of his past clubs saw us introduced to other Hammers old boys like Phil Parkes, Alan Taylor, Tony Gale, Ian Bishop, Trevor Morley and Tony Cottee as they mingled with diners. 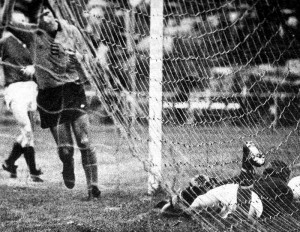 Gould celebrates a goal on tour with Wolves in Sweden in 1976.

“This is the second time in a few weeks I’ve been round the hospitality boxes,” Gould added.

“It’s great fun, more so on Tuesday as I met some Wolves fans, including one or two from Stourbridge, and had good banter with them.

“The executive boxes double up as hotel rooms and I stay over after night matches. I asked for a room near the end Kevin Doyle scored at because it’s lovely to pull the curtains back in the morning and look out over the goalmouth when I once hit a hat-trick in the League Cup against Tranmere!”