Corica Bows Out On A High 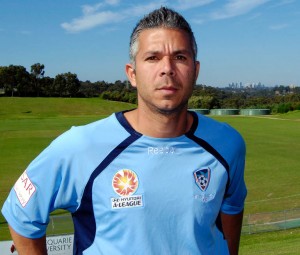 Steve Corica has brought the curtain down on his playing career in glorious style – thanks in part to a blunder by his former Wolves team-mate Kevin Muscat.

A serious hamstring tear prompted the nimble midfielder to announce recently at the age of 36 that the current season would be his last.

He was already pursuing a coaching career when he played his last game several weeks ago but his club Sydney FC gave him a memorable send-off from the playing ranks by last weekend winning the Hyundai A-League for the second time.

And his good mate Muscat played an unfortunate role in the success by missing a penalty for Melbourne Victory in the shoot-out at the end of the Grand Final at Melbourne’s Etihad Stadium.

It was definitely a case of the curse of the commentator as the hard-man defender was described to Fox Sports viewers as ‘the master of psychology from 11m’ and ‘a man who rarely if ever misses’ before hitting the post with his kick.

Muscat, now completely bald, was also referred to as ‘the professor of the penalty’ but was a forlorn figure as Sydney celebrated, with Corica receiving the trophy alongside acting captain Terry McFlynn.

The Victory skipper had consolation when named later in the week as captain of the league’s team of the season, Corica being selected as skipper of the league’s all-star team of 2009-10.

Corica scored seven goals in the campaign and has had a 21-year playing career that ends with him being described as a legend at Sydney and the club’s best player in recent seasons.

Despite making only 112 appearances in five injury-hit years at Molineux in the second half of the 1990s, he has played more than 200 matches in the Aussie League, including more  than 100 for Sydney Marconi prior to launching his English career with Leicester. 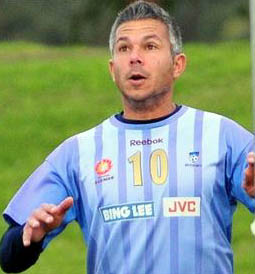 No prizes for guessing the Sydney FC nickname!

He has also been busy in recent times coaching youngsters at Sydney, whose nickname is the Sky Blues.

Corica’s name also lives on in his native North Queensland.

His junior club Innisfail United named their home ground the Steve Corica Oval and have had his brother Michael in their squad.