Black Back To Where It Began 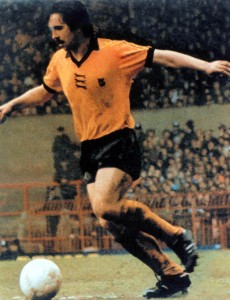 John Black in his Wolves first-team farewell at Old Trafford in 1979.

Not least because the 16-year-old turned his back on his beloved Rangers to try his luck in the Football League and had also attracted strong interest from Arsenal, Manchester United and Leeds.

“My mates thought I was mad and my family were flabbergasted because I had been offered a place on the groundstaff at Ibrox and was there on the terraces when I wasn’t playing,” he said. “I was a keen supporter.

“But it was my ambition to play in the English First Division and I had spent two or three years going down to Arsenal in all the school holidays.

“I verbally promised to join them but my mum died and I was reminded by my dad that it would have been her greatest wish to see me play for Rangers, so I stayed there for a couple of years.

“When push came to shove, though, I still preferred England. Arsenal had by now washed their hands of me but Joe Gardiner was really kind in taking such a keen interest, so I joined Wolves.”

Black, a talented winger, might have grown to regret his decision as he played only six first-team matches before joining Bradford City in 1980 and then Chesterfield and Hereford.

But he is proud of his Molineux football roots and made the pilgrimage back to watch the recent Premier League clash with Manchester United – the side against whom he made his final senior Wolves appearance on the last day of 1978-79.

“Players like Frank Munro, Willie Carr, Kenny Hibbitt, John Richards and particularly Derek Parkin were extremely kind to me and I grew up while I was in Wolverhampton,” he added.

“Frank was really helpful and would take me aside and put me right on one or two things, especially if I was getting too big for my boots. I was also invited to his house and looked after his kids at times.

“There were a lot of good young players around and I didn’t get that much of a look-in but I still have the jumper, with my initials on, that we were all given for travelling to the 1980 League Cup final in.

“When Wolves were promoted last spring, a Manchester United-supporting friend of mine suggested we go down to their game at Old Trafford this season. I said I’d rather go to the one at Molineux because I have happy memories from the place and don’t think I’d been back since the day I left.

“Mel Eves helped get some tickets and we had a good catch-up afterwards. He asked whether it was four or five hours’ drive back home and I said that was just the bit to Glasgow. We then had the same again because, although I was born at Helensburgh on the west coast, we live well north of Inverness, 60 miles from John O’ Groats.”

Black, 52, was given his Wolves debut in a 3-1 win at QPR in December, 1977, by the man he rated the best of the Wolves coaches he worked under, Sammy Chung.

He also faced Bristol City, Albion and Manchester City that season and Leeds and United the one after before rejecting the offer of a new two-year deal and joining Bradford permanently after scoring five goals in seven games on loan with Roy McFarland’s side. 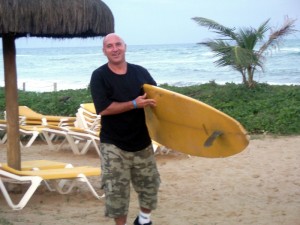 Black about to take to the surf in 2009 - during his second holiday visit to Brazil.

He was a promotion winner while making well over 50 appearances at Valley Parade and later had a year in New Zealand with Christchurch United that would probably have been three had his wife and kids not been back in Yorkshire.

Black wasn’t done. He remained in football courtesy of a stint as player-manager of Highland League side Brora Rangers before calling it quits at 41 thanks partly to a knee injury he’d had an operation on during his Wolves years.

He now works in mental health and nursing, having previously trained in sports coaching and injuries on a two-year full-time course.