Bill’s Thrill At Being Given Boot!

A Gift Bearing The Wright Fingerprints 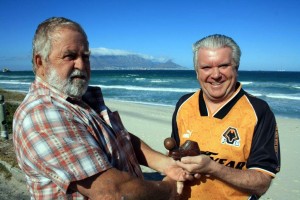 A suitably-clad Bill Cadwallader gets the boot from Mike Crocker!

A keepsake presented by Billy Wright in South Africa six decades ago is returning to the public domain in World Cup finals year.

The wooden boot and ball was handed over as a thank-you by Wolves’ most famous ever captain when the club toured the country in 1951.

It has recently been passed on to Cape Town-based Wolves fanatic Bill Cadwallader, who is now exploring ways of how it might be seen by a bigger audience.

“I have a dear friend called Mike Crocker along the coast in Mossel Bay and his father Cecil knew Billy very well prior to the war,” Bill told us.

“When Wolves came here for the first time, Cecil helped organise the East London leg of the tour and Billy stayed with him – we think for two days.

“Cecil was heavily involved in Border soccer during that time and was presented with the boot at a function in East London as a thank-you.

“Mike is an avid Liverpool fan and passed the gift on to me a few weeks ago, knowing I was a keen Wolves supporter.”

Wolves Heroes suggested it would be a good idea for Bill to be photographed with the boot and ball in a recognisable South African setting and were astonished to be sent the evidence of a follow-up meeting between he and Mike – a picture of them with Cape Town’s Table Mountain as the dramatic backcloth.

Bill points out that the photo (above) is taken from Blaauwberg sea front, with the city’s World Cup stadium, where England face Algeria on June 23, somewhere in the background!

What the locals wouldn’t know is that Wright attributed some of the huge success in his later career to the 1951 trip, where Wolves’ 2-0 victory over Border Frontier State on June 13 was one of the more demanding challenges on their 12-wins-out-of-12 tour.

The skipper had ended 1950-51 in the doldrums amid long-term worries over his form but regained his edge and confidence on the side’s travels, which also included matches in Cape Town and Mossel Bay.

“There are a few hardy souls here that assure me they remember the Wolves v South Africa X1 games and one the club played at Hartleyvale here in Cape Town,” Bill added.

“Work brought me out here much later than that but this gift has got me looking for other information from the tour and the one in 1957. 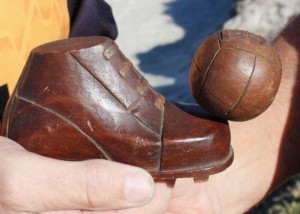 “As opposed to this crafted article sitting on my bar here, though, I would like it to be seen by a lot more fans. There are too many interesting things buried in dusty cupboards and drawers.

“That has turned my thoughts to thinking about sending it back to Wolverhampton.”