A Collection In The Classic Mould

How Malcolm Realised His Driving Ambition 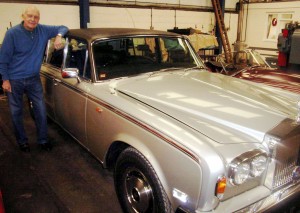 Talk of footballers and their flash sports cars normally relates to modern-day players.

But Malcolm Finlayson, old enough in the countdown to his 80th birthday this summer to have been a granddad to any of the England stars heading soon for South Africa, has a collection that would make many a WAG look twice.

The former Wolves keeper has no fewer than seven cherished models in storage – and several more on the road in various locations.

Modestly, he has previously shunned publicity on the matter but agreed to be interviewed by Wolves Heroes as he is considering selling at least some of the classics in the next few weeks.

“I have never wanted to boast about the vehicles,” he said. “That just isn’t my style, so many people I know would have no idea I have them.

“I bought most of them in the late 1970s, well over ten years after I finished playing football, and love them to bits.

“They have never been driven by me in bad weather and they have low mileages as well as, in the main, being taxed, MOT’d and in good condition.

“It’s only in the last year or so that I haven’t driven them. I have been asking myself whether I want to hang on to them indefinitely and am having them looked at in the next couple of weeks by an auctioneer, so we’ll see what transpires from that.”

So what desirable items does he have? 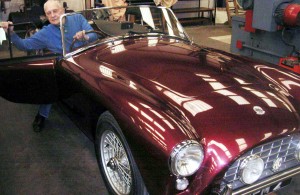 2. An AC Ace Bristol, 51 years old. “This is my favourite one,” he says, pointing out that he is in the AC Members’ Club and attends their meetings in the grounds of stately homes.

3. A 1977 Rolls Royce, bought new in the year of manufacture. Showing only 9,000 miles on the clock but ‘not worth as much because it doesn’t have scarcity value.’ Has been with its owner to Scotland as it is considered a good touring car. 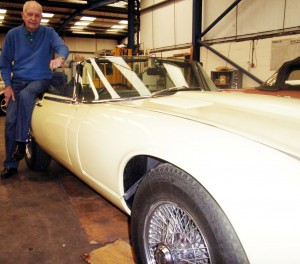 Malcolm with another of his treasured collectables.

Finlayson became much richer from his life in business than the one he savoured in football with Wolves, where he won two League Championship medals (1958 and 1959) and played in a winning FA Cup final side (1960).

But he knew austere times, too, and had to enrol at 14 in the shipyards of his native Dumbarton, near Glasgow, because his family couldn’t afford to keep him at school.

“Millwall were my first club and I subsequently went to Lewisham Polytechnic to study business,” he added. “I didn’t want to go back to the shipyards when my playing career was over.

“I used to sell jam for Hartley’s in the south-east outside of my football duties and later went to Wolverhampton Polytechnic to do business studies and accounting. While I was still at Wolves, I started my own business, which is still going.

“I preferred that to playing golf and billiards, which is what some of the lads did in the afternoons.

“Three days after passing my test, I proudly drove it to Scotland, stopping overnight because there were no motorways then – only A and B roads. It was a delight, though, because of the scenery and absence of traffic.

Just nice for a post-war drive to the seaside - the popular keeper's first 'wheels.'

“Not many players had cars in those days because a lot of them were coming out of the forces and maybe settling down and starting families.

“Petrol was expensive as well and still rationed after the war but I was a single guy living in digs. Even so, I was glad my pay soon went up to £12 a week.”

Finlayson made the most of his hobby by becoming a driving instructor at the RAF police driving school at Netheravon, Wiltshire, from 1951 to 1953. He also played in goal for the RAF at home and abroad.

He is not quite done with the above list. He also keeps a Mercedes in his native Scotland, a Toyota MR2, a turbo-charged Rover 800 which he uses as his Midlands run-around, a BMW and a couple of Saabs. 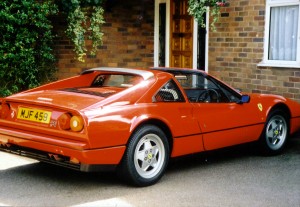 A Ferrari on the drive - that's his as well; with personalised number plates, of course!

Not too bad at all for someone who never received more than £20 a week from football!