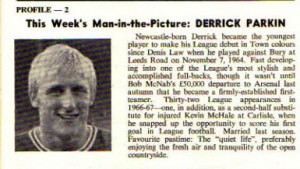 Michael Capewell recently purchased two Huddersfield v Wolves programmes from the 1960s in which the popular full-back’s Christian name appeared differently at a time when he was on the Yorkshire club’s staff.

Wondering whether Wolves watchers had been guilty of spelling it incorrectly or even whether there had been a change over the years, Michael asked us to investigate after the two programmes used the version ‘Derrick’. But the answer was simple.

“I’ve always spelled my name Derek and don’t even remember the Huddersfield programme printing it any differently,” Parkin told us. “I can assure you it must just have been a simple mistake.”

Surviving and suitably robust members of Wolves’ triumphant 1960 Wembley side will be reunited on Saturday to celebrate the ‘golden’ anniversary of the club’s last FA Cup final success.

It is 50 years next month since Wolves beat Blackburn 3-0 to lift the Cup for the fourth time and the visit of the same opponents this coming weekend presented a fitting opportunity for a get-together.

Although three members of the team have passed away and some others are in poor health, Malcolm Finlayson, George Showell, Gerry Harris, Ron Flowers and Bill Slater will be present for a lunch and a walk on the pitch.

Also in attendance will be wives of some of the infirm plus the Wolverhampton-based daughter of Des Horne, who was over from South Africa last autumn.

Old Magic Is Still There

Steve Bull and Andy Mutch kept more than 100 Wolves fans thoroughly entertained on a night of pure nostalgia at the Raven pub in Quarry Bank earlier this month. 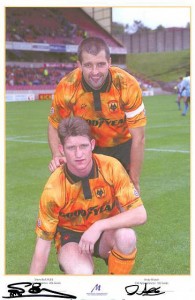 The strike duo were in sparkling form when taking to the stage together for the first time in this format.

By way of a satisfying bi-product, the event raised £185 for Help For Heroes – the charity set up to assist servicemen and women injured while on duty.

While in attendance, Bull and Mutch did a favour for organisers Midlands Memorabilia by signing a poster which captures them together before a match at Molineux and displays their mind-boggling Wolves-games-and-goals statistics. Click on the Midlands Memorabilia icon in the right-hand column of this page to learn more.

Among the moving tributes being sent are several from the player’s former colleagues at Vancouver Whitecaps, including one from Les Wilson, who was also a friend of the Parkeses at Wolves.

Wolves All Stars once again proved a draw when their match at Cradley Town against a People Plus/Minivator United team raised an astonishing £4,000 for victims of the Haiti earthquake.

Some £2,000 was raised on the night and the figure was subsequently doubled by Minivator’s MD.

“Considering the game initially had to be postponed in February because of snow, we were delighted with how it went,” said organisers’ spokesman Jason Guy. 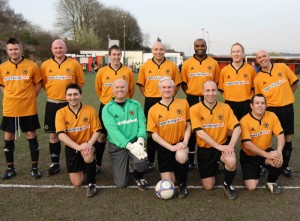 Wolves All Stars - another worthy cause helped.

The All Stars’ opponents were made up of employees from People Plus Recruitment, who are based in Chapel Ash, Wolverhampton, and their biggest customer, Minivator Limited from Kingswinford.