Day Of Doom At The Dell

Third of the nine…..Ron Flowers fails to cut off Terry Paine’s shot as Wolves no 2 Joe Wilson looks on and Dave Maclaren finds himself grounded.

Jimmy Melia may not recall much about the two dozen games he played for Wolves but he well remembers one of the 139 (with 11 goals) that he played for his next club, Southampton.

The Saints signed the stylish schemer for ₤30,000 in November, 1964, and die-hard Wolves fans would prefer to forget the impact he made against their side.

On September 18, 1965, Wolves arrived on the south coast for a shock lesson in Second Division football. Jimmy says: “I looked at the clock and it was 20 past four. We were winning 9-2 (it finished 9-3) and I must have made seven of ’em.  Didn’t score myself, though.”

Melia wasn’t the only ex-Wanderer at The Dell at the time, counting Ken Wimshurst among his team-mates, with Fred Kemp also joining a squad managed by Ted Bates and featuring such notables as Martin Chivers and Terry Paine. Winger David Thompson was soon to join Saints at Melia’s tip-off and another player recommended to Southampton was Les Wilson, who chose to stay at Molineux. 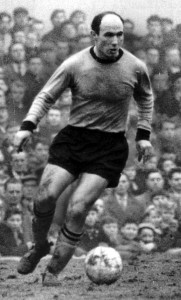 Melia in his Molineux days.

Clearly, Jimmy Melia had an eye for a player, a gift obviously learned while working for those in the legendary boot-room at Anfield.

“Bill Shankly was a wonderful man,” he added. “He joined Liverpool in 1959 to inherit a team that was good but nothing special. Shanks changed everything around – the practices and training. There was such passion, such feeling. He brought in St John and Yeatsy and the like. First game, we lost 4-0 at home to Cardiff! Next season, though, we were champions of the old Second Division. He was a brilliant man-manager.”

Melia, who was raised in the notorious Scotland Road district of Liverpool and who played for England schoolboys alongside Bobby Charlton and Wilf McGuinness, signed professional for the Reds in November, 1954, and made his debut in 1955-1956. Young men at the time had, of course, to do National Service.

“I was two years in the Royal Signals. I played in the Army team alongside Alan Hodgkinson, Bill Foulkes, Graham Shaw, Duncan Edwards, Cliff Jones, Peter Swan, Dave Mackay and Bobby Charlton.” He chuckled: “I don’t know how I got into that team.”

Jimmy managed to get home most weekends to play for Liverpool and his reputation as a skilful ball player grew. The seemingly ever-follically-challenged Melia thrived under Shankly and, in his exalted Anfield career, scored 76 goals in 269 League appearances. He was called up twice by Sir Alf Ramsey (a ‘great tactician’), for games in 1963 against Scotland at Wembley and against Switzerland in Basel, the latter won 8-1 with the midfielder scoring.

“But by now I had my injury and I really struggled to get fit.” Which is when, as we learned in our previous article about Jimmy, he sought pastures new, at Molineux. 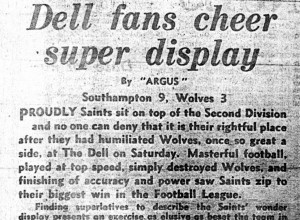 Post-script: Melia said of the 9-3 win over Wolves in the 2000 publication ‘Match Of The Millennium’: “Martin Chivers, who was playing no 9, came to Ted Bates and said:’I don’t want to play with that number on my back.’

“On the Friday before we played Wolverhampton, Ted said: ‘Jimmy, will you put no 9 on?’ I said: ‘I don’t care what number I wear. It doesn’t make any difference to me.’ So, for the first time, I put no 9 on and I’ll never forget this game. Because I had no 9 on, David Woodfield marked me all over the field, so he left a big gap right through the middle and, every time we went down, we scored goals. I probably had one of my best games ever and didn’t score a goal.”

Thanks to our friends at Southampton-based Hagiology Publishing (website address: www.hagiologists.com) for this extract and the Saints v Wolves picture near the top of this feature.