Sunday Date With Stoke This Weekend 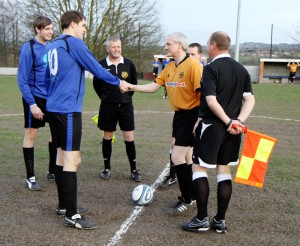 Mel Eves does the honours before Wolves All Stars' recent game at Cradley Town.

Wolves All Stars, having helped raise a staggering £8,500 from their first two games of 2010, continue their support of good causes by facing a Stoke City old boys team this Sunday (April 25).

The game, at Stafford Rangers’ Marston Road ground, kicks off at 2pm and is in aid of NACCPO, the charity that helps families with cancer-stricken children.

Also putting their weight behind the match have been Nick Hancock, Rachael Heyhoe Flint and Jeremy Bates.

“We’re always delighted when our presence can make a difference,” said Eves, player-manager of the Wolves side.

“We’re thrilled to have helped raise the money we already have this year and the signs are that there will be a good turn-out on Sunday.

“It should be a great family day out and we hope to see as many people as possible in attendance.”

Tickets are available from http://www.srfccharitymatch.co.uk/ and the game is followed by a charity dinner at 7pm. 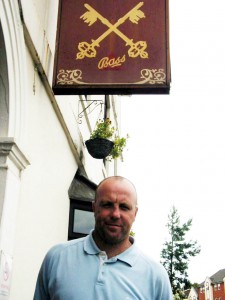 Stafford Rangers manager and one-time Wolves defender Chris Brindley in front of his pub, the Cross Keys at Hednesford.

Further details about Sunday’s game are available by ringing Eddie Johnson on 07973 618169.

NACCPO have their roots in Stafford as Operations Manager Rachael Olley, who has had a child with cancer, lives in the area.

Already in 2010, the All Stars have beaten a Forest Falcons Select X1 and proved too strong at Cradley Town for a Peopleplus side.