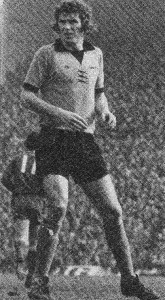 Peter Withe......coming soon on this site thanks to a reunion by modern technology.

Wolves Heroes continues to revive the friendships that other websites fail to reach.

Approaching two years on from our launch, we are delighted not only to have been able to tell fans what became of Molineux favourites but to have put one-time team-mates and pals back in touch.

Our features on Jimmy Melia have led to contact being renewed between the mid-1960s Wolves captain and fellow Scouser Fred Davies.

“Please pass on my details to him,” Davies said when Melia enquired as to his whereabouts. “We haven’t spoken to each other for many years.”

Further expert detective work by Charlie Bamforth means John Richards has recently been in touch with Jimmy Kelly, an Ulster-born winger and former colleague of his who we will be featuring soon.

And JR has caught up at the same time by email with Peter Withe, who we are also about to interview.

From the same era, John Black was very grateful when we told him where he could now reach Frank Munro – a valuable guiding light in his Molineux career well over 30 years ago.

“We had a good ‘blether’ yesterday,” the Scot said. “Frank has still got a great sense of humour and I plan to come down there and take him out.”

But not all the ‘Friends Reunited’ stories we have played a part in have been purely Molineux-related.

Through the power of Google, a Northumberland-based half-cousin of John Farrington read about the winger on Wolves Heroes and was subsequently reconnected with him.

We’ve even made friends out of people who didn’t know they were near-neighbours! Bobby Gould and Ken Knighton were surprised to be told they lived a goal kick apart in Portishead, Bristol.

“Bobby goes for a run every day along the bank of the Severn estuary and I do my power walking there,” Knighton said. 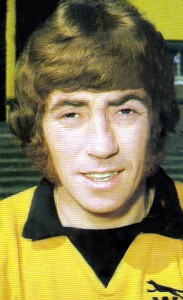 “Our paths never crossed as anything other than occasional opponents but we’ve got to know each other at last in recent months.”

We promise that other reunions will be announced by us in the coming weeks but no former Wolves player tracked down by us has proved more magnetic than Danny Hegan.

Fans from the West Midlands, Sunderland and Northern Ireland have been keen to make contact with him, as has one of his former Ipswich team-mates, the Australia-based Steve Stacey, and even an entertainer from his Butlins days.

PS And John Black has also just spoken to Gary Pierce ‘and had a few wee laughs.’