When There Was A Humphrey About

Watch Out! How Wolves Missed Other Big Names 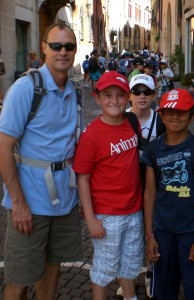 John Humphrey on a school trip to Italy last year.

John Humphrey was spotted by Wolves when playing against them for a London junior team. But the club’s success in landing him three and a half decades ago also became a case of rueing the ones who got away.

The eagle-eyed scouts who locked on to him might easily have picked up some other stars of the future because the defender was by no means the only player in his side who made the grade.

“From under-12 level, I played for a club called Bourne Hall, who were based near Bushey, a few miles south of Watford,” Humphrey said.

“I was with them for three years until I left school and was playing in their under-14 team as a 13-year-old when we played at Wolves.

“It was at Castlecroft and I had a decent game against their schoolboy side, so the scout approached me afterwards.

“But we also had Stuart Pearce, Kenny Jackett and Gary Waddock and they would have been playing as well, so I suppose Wolves could have signed two or three of us.

“We were all from North London and came together to play for Bourne Hall, who seemed to have a big catchment area, and won most of the competitions going locally.

“Stuart obviously went on to have the best career of all of us but, to be fair to Wolves, he was a late starter. They weren’t the only club to miss him. Everyone did.”

Everyone, that is, except former Wolves striker Bobby Gould, who took Pearce to Coventry in 1983, by which time Humphrey was well established at Molineux.

Having signed schoolboy forms and headed north for coaching in all the holidays, the Paddington-born player graduated to apprentice status and made his first-team debut in a 3-0 Easter Monday win at Southampton in 1980 after Geoff Palmer had failed a fitness test an hour before kick-off.

The teenager played again the following night as newly-crowned League Cup holders Wolves – on their way to a sixth-place top-flight finish under John Barnwell – completed a hectic southern tour by losing by the same score at Brighton.

Fifteen more senior outings followed before Humphrey embarked in March of the club’s 1981-82 relegation season on an unbroken run of 78 outings in the side – a sequence that included ever-present duty in the 1982-83 promotion campaign.

“I loved my time at Wolves,” he added. “There were ups and downs but I was also lucky enough to go on an end-of-season trip to America and we played against Jacksonville Teamen on the astroturf. 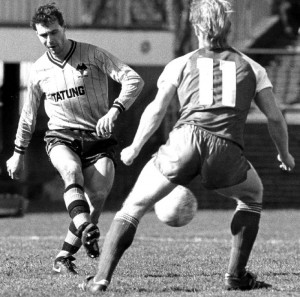 On the overlap with Wolves at the 'old' Molineux.

“Geoff Palmer let me in on that as well because his passport had expired and eventually he moved to left-back with me at right-back.

“I only left because we went down again in 1984-85 and I didn’t fancy playing in the Third Division. Charlton came in or me and they took John Pender from Wolves a few weeks later as well.”

Humphrey is now 49 and a full-time PE teacher and assistant head of year at Whitgift Public School in Croydon, as well as a match-day host and part-time coach at The Valley.