Lalley On The Cup Winners

Our Tribute To Wembley Heroes 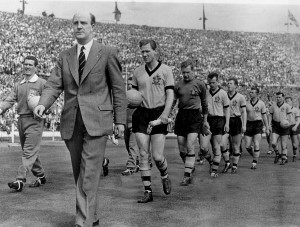 Stan Cullis leads his players out at Wembley 50 years ago this month.

It’s 50 years this month since Wolves last lifted the FA Cup – and we will be celebrating the fact in style on Monday.

John Lalley has penned a highly knowledgeable tribute to the Class of 1960, leaving us to post his insight for the enjoyment of Wolves Heroes readers.

In the last decade or so, the Express & Star contributor has met many of the greats from the club’s glory years and shares his personal observations and memories of them in an illuminating piece that traces their glorious run to Wembley.

It was a journey fraught with possible danger as Wolves hardly had the rub of the green with the draw.

Three times out of four, they were drawn away, although, ironically, the semi-final clash with Aston Villa that they battled through to was staged almost on the doorstep at The Hawthorns.

Stan Cullis’s side, as they were inclined to do, overcame all of those obstacles to reach the twin towers for the first time in 11 years.

And it was there that they beat Blackburn, Derek Dougan and all, to lift the trophy they had last held when beating Leicester 3-1 in that 1948-49 campaign.

Sadly, it was the last trophy from Molineux’s halycon days. Life became much tougher from then on. 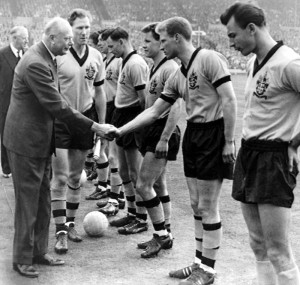 Bill Slater does the honours as Ron Flowers greets the Duke of Gloucester, with Eddie Clamp next in line.

Wolves whipped up some nostalgic feelings of their own by having the surviving and available members of the 1960 side on the pitch at half-time at last weekend’s Premier League clash with Blackburn.

Now, we hope you will enjoy our tribute to the team when we publish it in two days’ time.

It takes more than a Bank Holiday Monday to halt our output!