Long Career Of The ‘Other’ Molineux Buckley 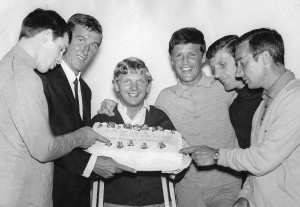 Paddy Buckley clutches a keepsake from one of Wolves' clashes with ADO The Hague in America in 1967, watched by (from left) Gerry Taylor, Fred Davies, Peter Knowles, Dave Woodfield and manager Ronnie Allen.

‘Being in the right place at the right time’ is how Paddy Buckley modestly explains his phenomenal haul of 33 goals in Wolves’ reserves in 1966-67.

History would suggest, however, that he was in the right place at the wrong time by being at Molineux at all over the same period as Dave Wagstaffe.

The diminutive Buckley had a more than decent career at his various clubs but was always likely to find it difficult breaking into the famous gold no 11 shirt while a certain Mancunian was around.

“Plenty of people were writing to the Express & Star suggesting I should be in the first team when I was scoring so often in the Central League,” he said.

“I have an idea I got 42 goals in all games in that season, including four against Bury reserves when Les Wilson nipped in front of me and scored our fifth!

“Some fans thought I should be on the left and Waggy on the right but the manager Ronnie Allen obviously didn’t see it that way.

“I was fast and could score a reasonable number without ever being that prolific again but Waggy was a terrific player.”

Buckley, signed from Third Lanark for £20,000 in 1964, made his Wolves debut at home to Birmingham a couple of weeks after Stan Cullis’s departure and scored three times in the 15 senior appearances he made that season – the second of them in a 7-4 defeat at Tottenham in March.

Relegation didn’t increase his first-team opportunities. He scored twice in six games the following season and once in his only two outings in the 1966-67 promotion campaign.

He was taken on the long successful jaunt to America that summer but sold to Sheffield United in 1968 despite continuing his promising goal ratio by netting at home to Stoke and Manchester United amid just five outings back in the top flight.

“The one against United came with a header from Peter Knowles’s cross in the first 30 seconds,” added Buckley, who is now 63 and living near his birthplace just outside Edinburgh.

“Derek Dougan cried off with flu, so I played centre-forward. I have recently received a cutting from the match that my granddaughter will be adding to my scrapbook for me. I was delighted to score against United but I soon lost my place again.

“I went to Sheffield United, where I grew so friendly with Tony Currie that he became godfather to my son. Then I joined Rotherham but had some serious injury problems and I now have two replacement knees. Terry Yorath once did me at Leeds and I damaged my cruciate ligaments.

“It didn’t work out at Rotherham and I went to play for 18 months in Australia for Pan Hellenic, the team now known as Sydney Olympic.”

As the curtain was falling on Buckley’ playing career, another field was opening up. Having been passed on a coaching course taken by Howard Wilkinson, he managed Gainsborough and Goole, taking Currie and winger Terry Curran to the latter. 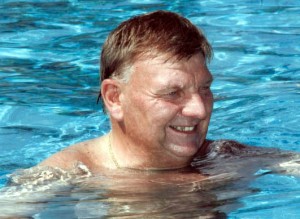 Paddy on holiday in Brazil in recent years.

And it was there that he achieved success in the President’s League Cup final against Barrow at Maine Road and went close to lifting the Northern Premier League title.

Alongside a newsagency business in Worksop, he also later managed Alfreton before returning to Scotland following the break-up of his second marriage.

Buckley is no relation to the famous former Wolves manager of the same surname but had football in his blood from a young age. His dad, also Paddy, was a Scottish international who played for Aberdeen and St Johnstone and died in November, 2008.