Once More Into The Breach For Ex-Skipper 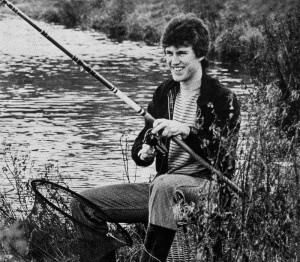 Tales from the riverbank - but our lone angler will be stepping into a much more frenzied atmosphere tonight.

Former Wolves players continue to be well to the fore in the gripping drama of the play-offs.

David Kelly, Rob Edwards, Dave Jones, Mark Kennedy, Jay Bothroyd, Gabor Gyepes and Mike Stowell were among those involved on the pitch or in the dug-out in the Championship semi-finals featuring Nottingham Forest, Blackpool, Cardiff and Leicester.

And, as the focus switches tonight to who will reach the League One final, this man (right) has a slice of history on his side.

We’ll keep confirmation of his identity hidden for a little longer and wonder whether this 30-year-old picture tells you everything you need to know.

He was a Wolves captain in the 1990s, signed by Graham Turner, and a highly-respected pro.

A further clue is that he was a play-off hero in the second half of the 1980s for the club he is in opposition to tonight.

He will be shoulder-to-shoulder at Charlton with his boss Danny Wilson because he is, of course, Swindon assistant manager Peter Shirtliff.

The 49-year-old, who was a commanding presence at Molineux from 1993 to 1995, netted twice late on for Charlton in a play-off final replay win against Leeds in the days before Wembley or the Millennium Stadium became last-day venues. 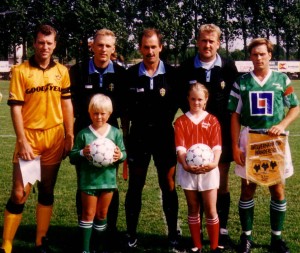 Peter Shirtliff leading Wolves on their 1994 tour of Sweden and Denmark.

And Swindon take the same 2-1 scoreline to The Valley tonight, when former Wolves loan man Kyel Reid is likely to be in the home squad.

Shirtliff writes a diary piece called ‘Get Shirty’ on the official Swindon Town website and spoke in his latest entry of one end-of-season sadness – the demotion of Sheffield Wednesday, the club he was playing for when the photo above was taken.

“I was disappointed to see my old team get relegated,” he wrote. “That’s football, though, and I’m sure they will be back.”