Looking Back Withe No Regret 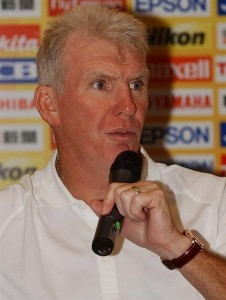 On the list of players who have got away from Wolverhampton Wanderers and then spectacularly pulled up trees elsewhere, you would think Peter Withe would rank very high.

As the winner of League Championship medals with two Midlands clubs and scorer of the only goal in a European Cup final for one of them, he has a CV to die for.

But Bill McGarry has rarely been pilloried for shipping out the Liverpool-born striker, who himself has no axe to grind over his release from Molineux after only 17 first-team games.

And the tale of how Withe came to the club’s attention in the first place – and then signed for them – represents considerable good fortune.

“I was playing in South Africa for Port Elizabeth City because I couldn’t find a club in England,” Withe told us. “But my wife didn’t like it there and we were basically on our way back when I decided to give it another go with Arcadia Shepherds in Pretoria.

“As chance would have it, Derek Dougan came to guest for us, saw me play and told Bill he had just found his successor up front.

“The result was that I went to Wolves for a three-month trial in about November, 1973, with Bill telling me towards the end of it that I was unlikely to be taken on, although he knew other clubs who were interested in me.

“But he arranged a practice game one day at the racecourse and I scored a hat-trick for the reserves as we beat the first team 3-1. He changed his mind that afternoon and I stayed.”

Withe, now 58 and living in Perth, Western Australia, scored on his Wolves debut in a home win over Ipswich in March, 1974, John Richards having succumbed to injury a week after scoring his famous winner in the League Cup final.

Two more appearances followed that season for the newcomer before goals against Carlisle and Luton provided the highlights of his 14 outings in 1974-75.

It becomes apparent from the player himself, however, that there was some blurring around the question of how much McGarry needed him.

“At one point, I asked him if I could go back to play abroad in the summer but he told me I couldn’t because I figured in his plans,” he added.

“Then we were in the sauna together towards the end of 1974-75 when he asked if I fancied going to play in America.

“I agreed that it would be good experience, so I signed for Vic Crowe at Portland Timbers. He also let Jimmy Kelly, Don Gardner, Chris Dangerfield and Barry Powell go around the same time but I got stuck over there until well into the new English season because we did well.

“I was actually transfer-listed by Wolves while I was in the States and he agreed a fee for me to sign for Peter Taylor at Brighton.

“But Freddie Goodwin, from Birmingham, flew over to watch me play and I ended up signing there instead.

“The reason I didn’t play many games for Wolves was the abundance of talent they had, in the reserves as well as the first team.

“The Doog was coming towards the end but everyone thought John Richards was going to be there for ten years, then there were Steve Kindon, who sometimes played wide, Peter Eastoe, Alan Sunderland and up-and-coming lads like Don Gardner and Norman Bell.

“Bill later took me to Newcastle for a couple of years, so he obviously thought I had something going for me. It was just that I couldn’t force a regular way in at Molineux.”

The great success Withe had at Forest, where he duly linked up with Taylor and Brian Clough, was surpassed by his winning of the League Championship and European Cup at Aston Villa. He also picked up 11 senior England caps before a succession of moves took in the likes of Sheffield United, Birmingham again and Huddersfield.

His many coaching and managerial posts have included the role as assistant to Jozef Venglos at Villa, the no 1 job at Wimbledon and stints in charge of the Thailand and Indonesia national teams.

He remains on the look-out for a way back in – ‘anywhere in the world’ – but is in closer contact than might be expected, 35 years on, with Wolves friends.

“Steve Daley was a good pal of mine and we spoke a few weeks ago when he just happened to be present when Gordon Cowans rang me from Newcastle,” Withe added.

“Steve had been speaking up there and told me the sad news about Phil Parkes’s wife. We were all neighbours in Fordhouses and I shared lifts with Lofty, Dales, Geoff Palmer and John Farley. It was a friendly club. 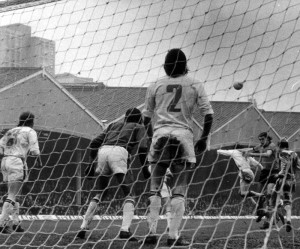 Withe troubles Luton's defence on the day he scored against them in 1974-75.

“I have kept in touch as well with Barry Powell, who I lived near in Solihull later on, and we had a visit about three months ago from Norman Bodell, the reserve coach who was trying to get us into Wolves’ first team all those years ago.”

Wolves’ trip to Australia last summer brought Withe an invite from host club Perth Glory to the games – and presented the chance to meet an old Villa friend, Tony Daley (the fitness coach at Molineux), plus two playing contemporaries of his, Mick McCarthy and Terry Connor.

Perth has been his home, ‘on and off’, for five years, partly because members of his wife’s family were already Down Under. But don’t assume his football travels are necessarily over.