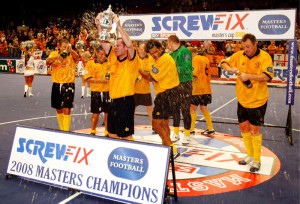 Hoping for more of the same.....Wolves in celebratory mood two years ago. Picture courtesy of Action Images/Keith Williams.

Wolves have been handed a tough task as they set out this weekend to regain their crown as Masters champions.

Having seen their impressive defence of the title ended at the national semi-final stage last September by eventual winners Tranmere, they find themselves in unusual company.

In Monday night’s Midland Masters tournament at Nottingham’s Trent FM Arena, they will again be competing with Albion – but not their other two familiar foes, Aston Villa and Birmingham.

Instead, the East Midlands quartet of Nottingham Forest, Notts County, Derby and Leicester make up the six sides from which only one will progress to the national finals on September 5 in Birmingham.

The teams will be split into two groups of three, with the two group winners meeting in the Midlands Masters final at the end of the evening.

Wolves were national champions in 2008 and again won the Midlands section in Birmingham last June, only to fall short in Liverpool three months later. Leicester were overall Masters in both 2006 and 2007.

At the age of 51, Mick Gooding has been persuaded to turn out again but Wolves are without two familiar figures in forwards Don Goodman and Darren Roberts.

Goodman thought he was going to be involved in a charity do this weekend and saw his place go as a result to David Kelly, only to then become available and find himself invited to line up for Albion! 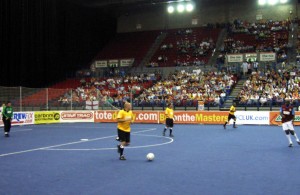 Scott Taylor on the ball against Villa last summer.

Roberts emigrated to Australia shortly after figuring last year and Wolves have a new face at the other end in keeper Derek Dudley.

The action kicks off on Monday at 6pm, with tickets costing from £7. Further information is available from http://www.seetickets.com/trentfmarenanottingham/price.asp?code=453971&filler1=arena