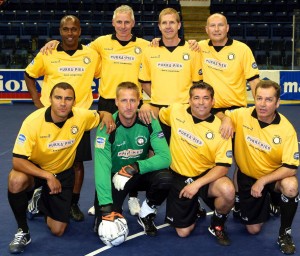 Wolves, the 2008 Grand Masters and beaten in last year’s national final, again performed well, only to narrowly miss out in the evening’s last fixture.

Having beaten Albion and Leicester to reach the Central final, they then lost 6-4 to Nottingham Forest thanks to some quite stunning shooting.

Paul Evans scored a magnificent hat-trick and, with Wolves pushing hard in the dying seconds after Jason Lee had been sin-binned, they were killed off on the break by Ross Bradley.

Scott Taylor and Billy Davies’s City Ground assistant David Kelly put them 1-0 and 3-2 ahead, with Phil Robinson and 51-year-old skipper Mick Gooding, who vowed last year’s tournament would be his last, also on target.

Bryan Roy and captain Nigel Jemson were the other marksmen for Forest, who now go on to the Grand Final in Birmingham in early September.

Wolves were initially grouped with Albion and Leicester in the six-club event, putting the Baggies out 2-1 as Michael Gilkes and Kelly scored late on before Don Goodman hit a consolation goal at the other end.

A draw in the final group game would have eliminated them because Leicester held a slight advantage having beaten Albion 3-2 in the opening match.

But Wolves ran out 3-1 winners as Mark Burke struck twice and Andy Thompson once, David Oldfield scoring a disputed equaliser with the last kick of the first half. 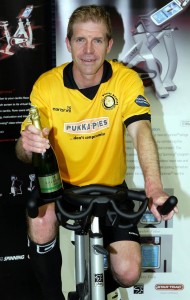 Phil Robinson celebrates being named Player of the Night.

It was a sizeable scalp as Leicester had won the Central Masters Cup in four of the previous five seasons.

Wolves usually contest the Midlands Masters in Birmingham but a change in format sent them this time to the east of the region.

Forest topped the other three-team group last night at the expense of Derby and Notts County.