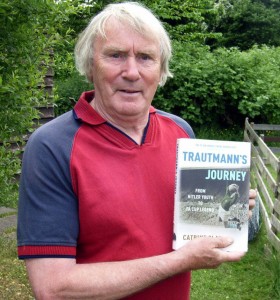 Dave Wagstaffe has taken delivery of a surprise gift – thanks to one of the giants of his pre-Wolves career.

The legendary Molineux winger, who has hand-written a worthy autobiography of his own, has recently become the grateful recipient of the life story penned by his former Manchester City team-mate Bert Trautmann.

And it was all down to a friend Waggy knows through having a caravan near Lancaster!

“This guy I know from the site was at Manchester City a few weeks ago for a fund-raising game where Bert had his book on sale,” he said.

“He told Bert he knew me and was promptly handed a signed copy of the book which he was asked to pass on.

“I’m very flattered Bert would do that for me. He is a very popular man around Manchester but I’ve been left the area a long while. Amazingly, it’s more than 45 years since City sold me to Wolves.

“I actually saw a feature on local TV up there a few weeks back about the book and I’ll obviously now enjoy having a read of it.”

Trautmann’s Journey tells the story of the one-time Luftwaffe paratrooper, who thrilled English audiences in peacetime with his daring performances – notably when he played on with a broken neck in City’s 1956 FA Cup final victory over Birmingham.

Before making a couple of appearances for Shropshire-based Wellington Town at the end of his playing career, he had the young Wagstaffe as a team-mate in the early 1960s – one game, in particular, sparking tremendous memories.

“When I was a youngster at City, I once went into the first-team dressing room to take some gear and Bert clipped me round the ear for not knocking first,” Waggy added.

“But he must have forgiven me because I recall playing in his testimonial game in about 1962.

“It was a combined City and United XI featuring the likes of Bobby Charlton, Denis Law and Derek Kevan and an International XI who had Stanley Matthews, Tom Finney, Jimmy Armfield and so on. 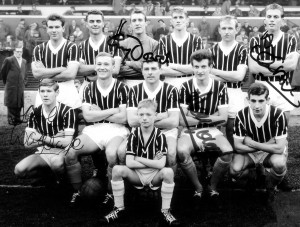 Waggy (front row, far left) on a partly signed Manchester City team picture. The keeper is Harry Dowd and the man on the far right of the back row is Michael Oakes's father Alan.

“Denis scored three goals and I got the other two in our 5-2 win. Officially, there were 48,000 there but a lot of people thought there were many more.

“I have a letter at home from Bert, saying he was overwhelmed at the turn-out for his game and thanking us all for taking part.