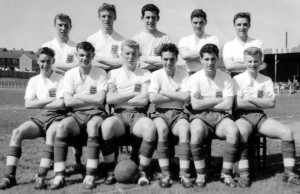 A teenage Bobby Moore as captain of an England youth side - but who is with him from Molineux?

With England’s World Cup hopefuls having touched down in South Africa, we at Wolves Heroes are adopting a topical theme.

Over the next two or three weeks, we plan to publish several articles linking either Wolves to the republic or their players to football’s premier tournament.

The first piece is due to go ‘live’ on Sunday or Monday and, to help set the scene, we have pleasure publishing a photo here that shows Bobby Moore at the heart of an England team. But it is a picture with a Wolves theme as well.

The West Ham legend played an astonishing 17 games for the country’s youth team in 1957-58 alone and, with Wolves then at the pinnacle of the game, he had several Molineux lads with him in the three lions.

No wonder, really, considering that was the season the Cullis Cubs sensationally won the FA Youth Cup, so becoming the first club other than Manchester United to do so.

All will be revealed in a few days’ time about which Molineux-based youngsters Moore, still the only England captain ever to get his hands on the Jules Rimet Trophy, played alongside.

But one of them, who features in the picture above, has his own strong links with South Africa and has just been interviewed at length by us at his home.

His tale is fascinating and one on which we will be expanding in one or possibly even two forthcoming articles. 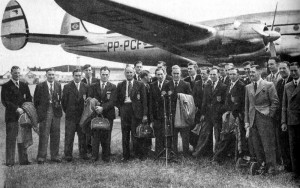 Billy Wright, another colossus of an England skipper, on duty at the 1950 World Cup.

In the meantime, here (left) is an insight into World Cup hype 1950 style – with a picture of the England side on the day they departed for the tournament in Brazil.

Billy Wright is pictured about to say a few words at the microphone, as he often did, with his Molineux colleague Bert Williams on the far left.

Fingers crossed that Fabio’s men do better this summer than their predecessors did 60 years ago!