On the day the 2010 World Cup finals kick off, Jim Heath, no stranger to watching England in tournaments overseas, looks back at a match and a movie with a sad ending – and offers some personal reminsicences of a game against the USA. 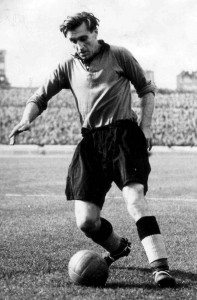 Jimmy Mullen - close to easing our embarrassment against the USA 60 years ago.

When England step out tomorrow to take on the USA in their World Cup opener in  Rustenberg, there will be more than a whiff of history hanging in the air.

It was, of course, in 1950 that one of the first and biggest ever World Cup shocks took place when the USA inflicted a 1-0 defeat on the three lions after we had kicked off our group games by beating Chile.

This extraordinary upset took place in the Brazilian mining city of Belo Horizonte, 300 miles north of Rio di Janeiro, on June 29, and came in our first World Cup and with a strong team including three Wolves players – Billy Wright, Bert Williams and Jimmy Mullen, as well as a host of other stars of the day including Jimmy Dickinson, Wilf Mannion, Tom Finney, Stan Mortensen, Roy Bentley and future England manager Alf Ramsey. Stanley Matthews was also in the squad but ‘rested’ for this game.

It was reported that bookmakers offered 500-1 against a USA win and the odds seemed justified considering the US team were mostly a collection of first-generation American part-timers drawn from club teams on the east coast, including five St Louisans.

The US had only one full-time professional player, Ed McIllvenny from Scotland, and had played together for only two weeks when they departed for Brazil, losing 9-0 to Italy in a warm-up game and being defeated 3-1 by Spain in their World Cup opener.

The match was very much one-way traffic, with England surging forward at every opportunity. In the first 12 minutes, they had six efforts on goal, two of which clipped the woodwork.

When the USA counter-attacked, though, the warning signs were clear. And, sure enough in the 37th minute, midfielder Walter Bahr attempted a speculative 25-yarder which seemed to be covered, only for forward Joe Gaetjens to lunge in and deflect the shot past the bemused Williams. 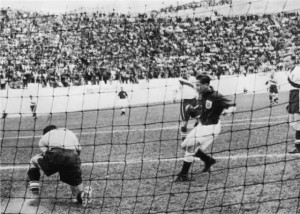 With the US keeper Frank Borghi emerging as the hero of the hour, it was one of those days for England and their last chance of redemption disappeared when Mullen had a header repelled in the closing minutes.

The Americans celebrated long and hard, with Borghi chaired off while the England camp were left stunned. The result sent shockwaves around the football world, although it was greeted in decidedly unusual ways in the participants’ own countries.

Football was so off the radar in the States that there was just a single journalist from there at the tournament – one Dent McSkimming from the St.Louis Post Despatch. And he supposedly had to use up his annual leave to cover it.

His report of the match was the only one to appear in any major American newspaper and even then the New York Times dismissed his first wired submission as a hoax. In England, sub-editors were equally flummoxed and the 1-0 scoreline was presumed to be some sort of mistake. Several papers initially reported the score as 10-1 to England!

That outcome would have been akin to the flow of the game. “We should have won nine or ten, and that’s not an exaggeration,” Williams said on BBC Radio 5 Live yesterday.

It proved to be a disastrous first World Cup for England as defeat to Spain in their final group game confirmed their elimination from a tournament won by Uruguay.

But  it was the game at Belo Horizonte that entered folklore and as recently as 2005 a major movie entitled ‘The Game of Their Lives’ was made to celebrate the USA victory.

The former Sheffield Wednesday player John Harkes acted as a consultant and played the Scot Ed McIllvenny. Only one England player was characterised, Stan Mortensen being played by Gavin Rossdale, the former singer of English grunge band Bush.

......or an utter nightmare for the English.

By all accounts, it was not a bad film but there was very little return on the $20m budget, which, not surprisingly, did not cross the Atlantic for a UK release.

Although England now lead the USA with seven victories to two, I had the dubious pleasure of attending in 1993 when the USA recorded their only other victory against us – one in which two future Wolves protagonists featured heavily.

The Foxboro Stadium, home of the New England Patriots, hosted this opener to the US Cup (a sort of dress rehearsal for 1994 World Cup, which also featured Brazil and West Germany).  This time, the USA comprehensively dismantled Graham Taylor’s dishevelled charges, who had just come off the back of a calamitous World Cup qualifying defeat to Norway.

Paul Ince became England’s first black captain on this wet night in Boston but couldn’t stop the swagger of the home team as goals by Thomas Dooley and Alexi Lalas compounded their misery.

Taylor’s reign was characterised by tabloid headlines, with The Sun at their most unforgiving as they greeted the defeat with the merciless heading “Stars and Tripe”.

This trip spelled the beginning of the end for Taylor and failure to overcome Holland in the final World Cup qualifier decided his fate. Nine months after Boston, he was installed as Wolves’ new manager. We can only wonder what sort of headlines we will be seeing in our papers on Sunday…..

* Tim Flowers made his debut in England’s next match in the USA, a 1-1 draw against Brazil in Washington DC.