London-based Wolves fan Glen Baldwin is packing his bags and getting ready to take in a couple of weeks of the World Cup in South Africa. Before departure, though, he presents an in-depth look at the impact Wolves players – men who played for the club before, during or after – have had on the finals of past tournaments. 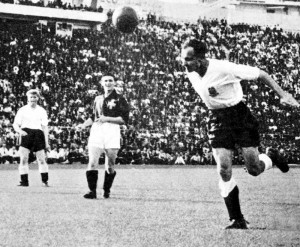 Dennis Wilshaw heads against the bar for England against Portugal in Oporto in 1955.

As the first African World Cup approaches the start of its second week, it’s interesting to note that Wolves players may be the scourge of England.

Two of our three representatives, Marcus Hahnemann and Adlene Guediora, are playing for countries in the same group and Nenad Milijas is due to face us in the second round if all goes to plan.

Three players is the best direct Wolves representation in the tournament for a long time.

As you would expect, we were well represented throughout the 1950s, with three players making the cut for the disastrous first England World Cup squad of 21 in Brazil in 1950.

All three, Bert Williams, Billy Wright and Jimmy Mullen, played in the win over Chile in the first game and were again in the team for the expected victory over USA – except the USA hadn’t read the script. They went on to a famous 1-0 win that put England under pressure to win the last group game, against Spain, to progress.

Mullen was dropped, maybe due to his last-gasp miss in the USA game, but both Williams and Wright continued in the team. Spain won 2-0 and the FA wondered why they had bothered to enter the tournament at all.

Four years later, Wolves had three players in the 17-strong squad who travelled to Switzerland. Wright and Mullen were called up again and were joined by Dennis Wilshaw.

In another stuttering tournament for England, Wright led the team out in the first game, a 4-4 draw against Belgium after extra-time, with England leading 3-1 with 20 minutes to go.

Changes were made for the final group game against the hosts in the Wankdorf stadium in Berne and both Mullen and Wilshaw were drafted in. In another win-or-bust game, the Wanderers duo were the difference with Mullen opening the scoring just before half-time and Wilshaw making the game secure mid-way through the second half.

Mullen did not make the quarter-final against Uruguay but Wright was again captain and Wilshaw played the full 90 minutes as a crashing 4-2 defeat sent England home early again.

The 1958 finals in Sweden brought the highest Wolves representation of four players, as to be expected from the best team in the country at the time.

Wright was captain once more and joined this time by Eddie Clamp, Bill Slater and Peter Broadbent. The trio of Clamp, Wright and Slater played through all three draws in the group stages, against USSR, Austria and Brazil – the only result of note being that they became the only team to achieve a clean sheet against the eventual free-scoring champions. 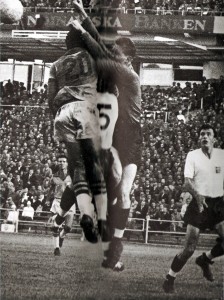 Eddie Clamp (right) on patrol against Brazil in the 1958 World Cup.

A play-off was needed against the Soviet Union in Gothenburg and, although Broadbent was brought in at the expense of Bobby Robson, Clamp was among three other players dropped.

The Soviets ground out a 1-0 win and England were out. Although all three of the other home nations qualified for the first and only time, Wolves had no members in their squads.

By 1962, after the great Wolves team of the 1950s had started to break up, Ron Flowers was the only player to make the final 22 for Chile. He did the club proud, however, by ending up as England’s top scorer, having hit a penalty in each of the first two group games – a 2-1 defeat against Hungary and a 3-1 win over Argentina.

Flowers also played in the last group game, a 0-0 draw against Bulgaria, and was again in the team who lost to Brazil in the next round.

Flowers kept the Gold Flag flying in 1966 but didn’t manage any time on the pitch, although he picked up a World Cup winners medal.

So who was the next Wolves player to make a World Cup squad? Peter Knowles might well have made it to Mexico in 1970 had he not retired from football and England’s failure to qualify for West Germany in 1974 possibly cost John Richards a chance.

But Scotland omitted the skills of Jim McCalliog, Frank Munro and Willie Carr from their tournament squads in 1974 and 1978 (in Argentina) and Wolves’ decline in the 1980s meant that no player made the finals in 1982 in Spain or Mexico in 1986, despite England, Scotland and Northern Ireland making both tournaments. 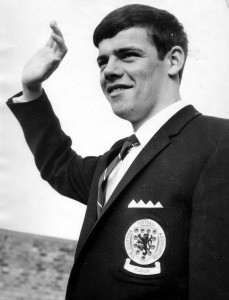 A young Frank Munro is pictured in his Scottish blazer. But the supreme Wolves defender could find no way into a World Cup finals squad.

Of course it was Bully who became the next in a select band of World Cup Wanderers. After his two-goal performance against Czechoslovakia in one of the last pre-tournament friendlies, he forced his way into the squad and a face-saving equaliser as substitute in the last warm-up in Tunisia and a goal against a Sardinian XI in training had all of us dreaming of a potential Wolves golden boot in Italy.

Bobby Robson was roundly condemned by the press for leaving him on the bench until the 83rd minute in a turgid draw against Ireland, a game ideally suited to his game. Then he was given a few extra minutes against Holland before finally starting in the last group game, versus Egypt, but he couldn’t find the net in his 83 minutes.

Again, he was brought on in the second round game against Belgium and could just be seen over David Platt’s shoulder as the Villa player scored a dramatic winner. I like to think that if Platt wasn’t there, Bully could have been the country’s hero but he would have probably been forced to leave us after the tournament if that had been the case!

The only other time Bull was seen in the finals was in joining in the Mexican Wave on the bench in the pointless third-place play-off in Bari.

Since then no other current Wolves player has made an England squad but we did still manage representation in 1994 and 2006. Although born in Birmingham, David Kelly played for the Republic of Ireland from 1988, making the squad in Italy in 1990 without playing.

He again made the 22 for USA in 1994 while with Wolves but his only appearance was as substitute in the ‘very British’ 0-0 draw against Norway as the Irish qualified from their group.

The international nature of the game is reflected in our sole representative since. South Korean Ki-Hyeon Seol had made his name in his home tournament in 2002 and joined us from Anderlecht two years later. The Koreans did not make it past the group stage in 2006 and Seol came on as a sub in the last two games against France and Switzerland without much impact.

To stretch the Wolves connections further, Mick McCarthy was a member of the 1990 Irish squad while at Lyon and famously had a falling out with Roy Keane in 2002 when coaching the team to a second-round defeat against Spain on penalties. And Bill McGarry represented England in Switzerland in 1954.

Another former Molineux manager, Glenn Hoddle, played in the finals of 1982 and 1986 before leading England in 1998 when we were unlucky to lose to Argentina on penalties. The final managerial link is New Zealand’s current coach Ricki Herbert, who was a stalwart in Wolves’ defence in the dark days of 1984-86. He also played in New Zealand’s only previous finals appearance in 1982.

Loose connections who made Germany in 2006 were Hahnemann in the US squad and two Aussies who never made our first team in Tony Popovic and the expensive mistake Zeljko Kalac.

As well as Seol, another player from 2002 was brought to Molineux before the next World Cup, Isaac Okoronkwo, who played all 3 games for Nigeria, including the 0-0 draw against England in Osaka. But he didn’t last as long. Gary Breen was an unattached player in the Ireland squad along with Robbie Keane and David Connelly. Both Breen and Keane played in all four Irish games, Keane scoring three times. Connelly went on only in the fateful game against Spain and duly missed one of the penalties in the shoot-out.

In 1998, Wolves’ future and past were represented in the England squad. Paul Ince was with Liverpool at the time and played all four games and Tim Flowers was one of the substitute goalkeepers.

Haavard Flo played in four games for Norway in the same tournament, scoring against Scotland, while playing his club football for Werder Bremen, and Gunnar Halle, once a loanee from Bradford, was in their squad but didn’t add to his two appearances in 1994. Allan Nielsen, who also played on loan for Wolves, scored in the tournament in his five appearances for Denmark while at Spurs.

Joachim Bjorklund, who went on to play three times for Wolves before retiring, was a mainstay in the Swedish team who surprisingly finished third in 1994 and made six appearances.

John de Wolf, who would join us soon after the tournament, was in the Dutch squad but didn’t get on the pitch while Denis Irwin made two appearances for Ireland in the same USA finals as a Manchester United player.

Italia 1990 reveals two very loose Molineux connections if you consider Gazza a Wolves player once and you remember that Dave Beasant played four games for the club on loan from Chelsea. 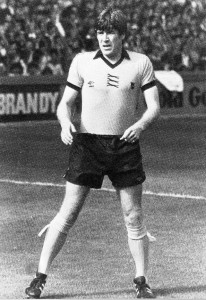 Emlyn Hughes - was still playing for England when at Wolves.

There are other links prior to 1990, albeit not while the players concerned were with Wolves. Peter Withe made the 1982 selection in Spain and a young Emlyn Hughes was called up for Mexico in 1970. Not forgetting that Derek Dougan, when playing for Portsmouth, turned out in Northern Ireland’s opening finals game of 1958, against Czechoslovakia, with team-mate Peter McParland – a 1962 Stan Cullis signing – keeping his place throughout the campaign.

So which player with a Wolves connection has been to most finals? Billy Wright’s record of  ten appearances in three tournaments is phenomenal but step forward Sami-Al-Jaber, who played four games for Wolves in 2000-01.

He played in four tournaments for Saudi Arabia from 1998 to 2006, making a total of nine appearances and scoring against USA, France and Germany. That puts him alongside Keane with three goals but the accolade of the highest scorer in World Cup finals of anyone who has played for Wolves belongs to McParland. He netted five times in Sweden in 1958 for Northern Ireland.

So, as you watch the action from South Africa, hoping that our three stars have good games until they play England, keep an eye out for those future Wolves connections.