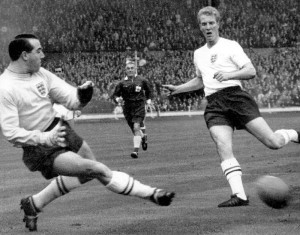 Ron Flowers covers his keeper Ron Springett in an England international at Wembley.

Wolves great Ron Flowers has revealed that he was so seduced by South Africa more than 50 years ago that he might have considered living and playing there in his peak years.

The blond wing-half was in his prime and thoroughly smitten with the country when he visited it as a member of Stan Cullis’s touring party in 1957.

And he has told Wolves Heroes: “I had married in the February of 1957 and had responsibilities here. But, had I been single when I went there with the club, I’d have been interested in staying.

“I just missed going there with Wolves in 1951 and fell in love with the place when I did go. The weather and the sport were the big attractions for me.

“I remember getting to know a fella who said he could fix me up with a club and a job in Johannesburg – but I don’t know what Stan would have said about all that!

“Even if I had wanted to go, players didn’t have freedom of movement then. The clubs had all the power.

“I know one English club came in for me but Stan would not even entertain the idea of me going. And Barcelona were meant to be interested in me, according to the papers.

“I had a wonderful long career with Wolves and was lucky to play for many seasons for England as well but many players stayed with one club for years and years, sometimes because they had little choice.” 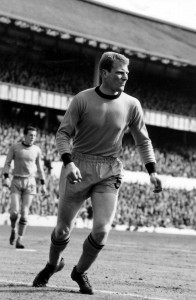 Flowers, with George Miller in the background, in a defensive role in Wolves' spectacular 7-4 defeat at Tottenham in March, 1965.

He also won 49 caps with England and was an unused member of Alf Ramsey’s victorious 1966 squad.

He returned to South Africa for a holiday around four years ago and said: “My friend got us an invite to go and see Terry Paine, who was also in the 1966 squad.

“Terry has some stables near Joburg as well as getting on very well in TV and has obviously done nicely for himself.”