Mick At The Mic – A Class Act 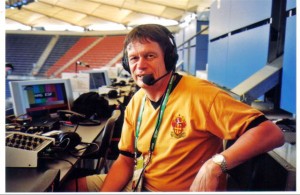 Graham Wellham keeping a seat warm for Mick McCarthy in Hamburg in 2006.

Mick McCarthy’s emergence as an authoritative and entertaining World Cup summariser has come as little surprise to those at the BBC.

Indeed, it was his work in the same role in Germany in 2006 that convinced one Wolves fan working at his side that his appointment at Molineux several weeks later was an inspired decision.

The 51-year-old McCarthy is no stranger to armchair audiences, having found himself in demand from the TV world following his outstanding record on both sides of the touchline with the Republic of Ireland.

As a player who won 57 senior caps, he reached the quarter-final of the world’s premier football tournament in Italy in 1990, then as manager steered the country to the brink of a place in the quarter-finals in Japan and Korea in 2002, only to lose on penalties to Spain.

Although club football occupies him these days, he has spent more than a fortnight in South Africa as one of BBC TV’s posse of summarisers, including Argentina’s clash with Paraguay and Portugal’s 7-0 annihilation of North Korea among his early assignments.

“Mick is highly thought of on the BBC team out there and I loved working with him four years ago,” said London-based Wolves fan Graham Wellham, then a commentary producer at the corporation.

“I hadn’t met him until he co-commentated with Simon Brotherton on the Argentina v Ivory Coast match in Hamburg, which was our opening game of the tournament, and he was brilliant.

“I was wearing my favourite Wolves shirt, the 1960 FA Cup Final one, and loved his incisive analysis, punctuated in his inimitable style by very dry humour.

“I don’t think I’m giving away any secrets to say that he clearly admired Didier Drogba, who scored in the Ivory Coast’s 2-1 defeat, and I was absolutely delighted to hear shortly after returning home from Germany that he had been appointed at Wolves.

“If ever a man was going to shake up Molineux, it was Mick McCarthy and I was cheering his team’s rousing victory over Ipswich from the back of the Stan Cullis Stand a few weeks later.

“The club were heading in the right direction again and, after our spending spree this summer, who knows what next season might bring!” 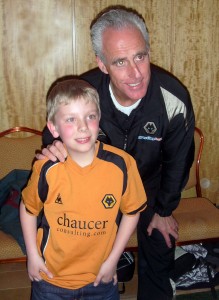 McCarthy with a young fan while in the capital for Wolves' game at Fulham in April. Picture supplied courtesy of London Wolves.

McCarthy, who was also on duty at last night’s Greece v Argentina game in Polokwane, is summarising in Durban at Friday’s Portugal v Brazil clash before flying home.

In addition, he is writing a series of articles in The Guardian and Observer and revealed in one how he had a scare on Friday when his flight from Port Elizabeth to Cape Town ended in an emergency landing after the pilot smelled smoke on board.

He was guaranteed a warm welcome back in Cape Town, though, when he eventually arrived. One of the BBC’s team assistants is a Wolves fan!