Memories Of The Doog

It was three years ago yesterday that Derek Dougan passed away. As a way of marking the sad anniversary with a detailed insight, we at Wolves Heroes contacted an international colleague of his who also had a prolific short spell at Molineux. 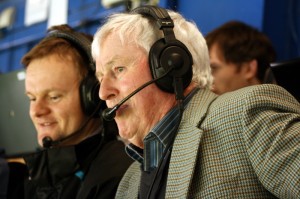 No-one is better placed than Peter McParland to assess just how good a fit Wolverhampton Wanderers and Derek Dougan were.

The Northern Ireland winger played alongside him not only for their country but also at Aston Villa – and is adamant the peak years were those The Doog spent at Molineux from 1967 to 1975.

“I knew him well and was talking to him on the phone on the Thursday before he died,” McParland said today from his home in Bournemouth.

“We were in regular contact and the last time I went to Molineux was for his funeral in 2007.

“The Wolves fans certainly saw the best of him. Everyone realised when he was there what a good player he was.

“I don’t think he took the game seriously enough earlier in his career. He was very casual in his approach and he seemed to treat football as a joke at times.

“But he was one of the quickest players I ever knew over 15 yards, a bit like Stanley Matthews, and he could run all bloody day. So when he applied himself properly, he became a terrific player at Molineux.”

McParland made his own big impression on Wolverhampton, scoring in his first three games when signed from Villa in the middle of 1961-62.

In a side who were striving to keep their heads above water, he netted in a convincing home win over the reigning double champions Tottenham, struck in a follow-up success at Cardiff and returned to the West Midlands to net against Birmingham in a third triumph.

The purple patch continued with a brace against Bolton soon afterwards and another couple of goals, including one in a remarkable 5-4 win at Chelsea. And his return of seven goals from 15 Wolves games that season was just as well as Stan Cullis’s side still finished only 18th in the First Division.

“I had always scored goals, although much of my job as a left-winger was to get to the byeline and set chances up for others,” McParland added.

“At the start of the following season, I was named to play against Manchester City but felt a twinge in my thigh when I was flicking the ball up in training the day before.

“Alan Hinton took my place, scored in an 8-1 win and I struggled to get back in. I still played a few and netted a couple at Ipswich but ‘Noddy’ had a great season and broke into the England team.

“I was in the reserves for many weeks and, when Plymouth came in for me in about the February, I went down there and signed.

“Although I won the FA Cup and League Cup with Villa, I suppose it would have helped me if I had joined Wolves before their decline started.

“I heard around the place that Stan had rated me for a while and Billy Wright always said nice things about me but Villa were determined to hang on to me.”

McParland, 76 and resident on the south coast since 1971, overseas coaching appointments aside, has some major entries on his CV.

As the scorer of winning goals in both FA Cup and League Cup finals, he is in a highly exclusive club and on top of that he netted five times at the 1958 World Cup in Sweden – the only finals at which all four home countries have all played.

“I think Gary Lineker is the only British player to have scored more at a World Cup finals,” he said. “It was a golden time for me but I was lucky to be with players like Danny Blanchflower and Jimmy McIlroy and we had a very good manager in Peter Doherty.

“The Doog played in the first match when we beat Czechoslovakia 1-0 but didn’t figure again after that as we lost to Argentina and drew with West Germany.

“We finished level on points with the Czechs and they didn’t use goal difference or goal average, so we played them again in a play-off which we won 2-1 after extra-time.

“The trouble was that we then only had a couple of days after qualifying from the group to prepare for the quarter-final against France and that included a long rail journey across country to Norrkopping.

“Derek was a quiet lad then, just finding his feet about the place, but I’m sure he regretted not playing more in Sweden because he didn’t play in another World Cup finals.”