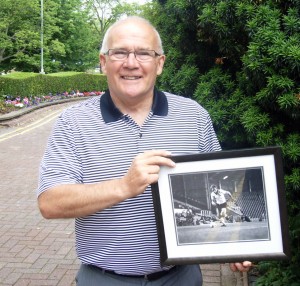 Fred Kemp with a photo showing his son-in-law John Marshall.

England’s progress to a World Cup date with Germany this afternoon has had a major direct impact on the life of a 1960s Wolves youngster.

Fred Kemp is the father-in-law and business colleague of John Marshall, a Wolverhampton-based Fulham veteran who is now part of Fabio Capello’s scouting team in South Africa.

Marshall works alongside Kenny Swain and David Geddis in watching future and prospective opponents at the tournament, so Wednesday’s victory over Slovenia meant he would be in the republic for another few days at least.

And the nation’s arrival in the last 16 had repercussions on the office and domestic front.

“John is only part-time with England, although he has been over there since about June 9,” Kemp said.

“He also watches a lot of Premier League matches for Fabio, particularly in Lancashire, so he is kept busy.

“At the same time, he is the project manager in our family interior refurbishment business, Complete Contracts of Kingswinford, so we’re having to be a bit flexible while we’re without him. 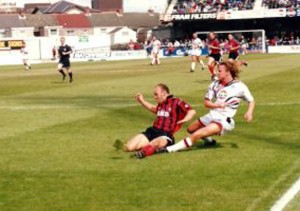 “I also work there, as does our daughter Samantha, who is John’s wife, but naturally we’re delighted England have made it out of their group.

“Much though we look forward to seeing him again, we hope he can help take us quite a bit further in the tournament.”

Kemp had planned to accompany his wife and daughter any time now on a trip to South Africa, where he played for Durban City some three and a half decades ago.

But a happy event in the family meant those plans had to be scrapped.

“Samantha gave birth to little Luca on June 2, so that’s all off,” he added. “Fortunately, John was able to spend some time with the baby before he went and now he sees him plenty when he contacts home via Skype.

“But he will no doubt be looking forward to having some quality time with him when he eventually returns.”

London-born Marshall, a 45-year-old former utility man, played 467 games from 1982-97 for Fulham and scored 32 goals. In a continuing display of astonishing one-club loyalty that has earned him a pace in Craven Cottage’s hall of fame, he later worked for them as a coach as well as chief scout under Kevin Keegan, Jean Tigana and Chris Coleman. 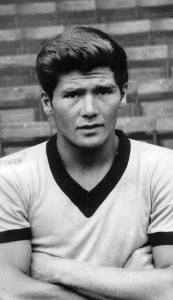 Kemp in his Wolves days.

He then spent several months scouting for former Wolves man Robert Kelly at Leicester before his friendship with Ray Clemence – forged through Keegan – opened the England door.

His two seasons in South Africa included a spell with Terry Wharton as a team-mate and also a stint alongside 1970 World Cup campaigner Alan Mullery.