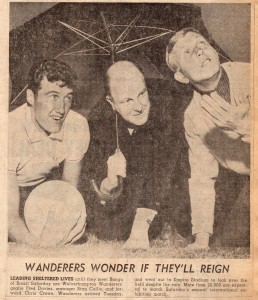 Chris Crowe (right) with Fred Davies and manager Stan Cullis in Vancouver on Wolves' summer trip to America and Canada in 1963.

Chris Crowe’s solitary appearance for the senior England side didn’t come in a World Cup. But, in achieving arguably the next best thing, he went very close.

The blond inside-forward, who died in 2003, must have been close to selection for the 1962 tournament in Chile, having impressively marked his arrival at Molineux the previous February.

In a struggling side who were to finish no higher than 18th in the First Division, Crowe scored seven goals in 14 matches, including two in an astonishing 5-4 win at Chelsea – Wolves’ only victory in the last ten games of the season.

A good showing in London, as the saying goes, never hurts anyone when it comes to possible international recognition but the former Leeds and Blackburn player lost out to the likes of Johnny Haynes, Bobby Charlton and the mercurial Jimmy Greaves in selection for the trip to South America.

Crowe’s time, albeit brief, was soon to come, though. Wolves started the following campaign brilliantly with an 8-1 trouncing of Manchester City and were top until beaten and deposed by eventual champions Everton in early October.

He scored five times in the first seven games, including both in a win at Blackpool and one of the two that defeated team of the moment Tottenham in front of 61,412 at White Hart Lane.

The reward was a place in the side against France at Hillsborough that autumn in what was then known as the Nations Cup (now the European Championships). His Wolves team-mate Alan Hinton was a fellow debutant and a third Molineux man, Ron Flowers, scored from a penalty in the 1-1 draw. 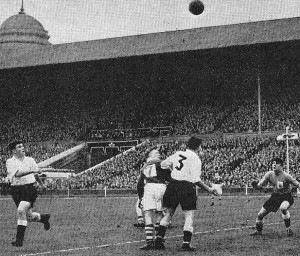 No 7 Chris Crowe in action for Scotland Schoolboys against England at a packed Wembley.

It isn’t the only curiosity in his career. Born in Newcastle-upon-Tyne in 1939, he lived for a while in Edinburgh, had a trial with Hearts and actually played schoolboy international football for Scotland.

He had switched allegiances to England, though, by the time he embarked on his under-23 duty and made more than 100 appearances for Leeds and 51 League games for Blackburn prior to a fine Wolves stay of 24 goals in 85 matches.

He subsequently played 74 times for Nottingham Forest and on 67 occasions with Bristol City as well as having stints at Walsall, Bath City and in Australia.

Crowe drove a taxi in Bristol in his later years and died in his mid-60s but might not have been such an asset had he had an international career in the age of the penalty shoot-out.

In an FA Cup tie for Bristol City at Tottenham, he once volunteered for a re-take after regular exponent Tony Ford had been denied by Pat Jennings, only to blaze his shot high over the bar. Spurs, leading 1-0 at the time, subsequently closed the game out – with Greaves showing how to put away a penalty.