Goals Galore For Forward Who Fell Short At Wolves 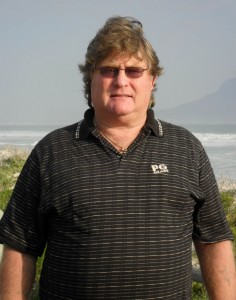 Mike Collins near his home in Cape Town.

For every Eddie Stuart and Des Horne, there is likely to be a lad from foreign climes who doesn’t make the grade – and Mike Collins falls into that category.

Forty years ago, Wolves’ new-look Molinews programme was hailing the South African youngster as another potential star in the making, dedicating more than one piece in its columns to his emergence after he was hauled in through the club’s scouting network.

Alas, the forward, recruited straight from school from Johannesburg’s southern suburbs, was destined to depart again without so much as a single first-team appearance and is now having a close-up of the World Cup from the homeland to which he returned three and a half decades ago.

But the potential Wolves spotted had some foundations, Collins subsequently having an excellent career back in South Africa.

“When I left here at 15 and became a Wolves apprentice, I had to do things I never did for myself before, like polish boots, clean the stands and wash and dry kit for my selected first-teamer,” he said.

“In South Africa, I had a maid who did all this for me, so it was a major shock.

“I arrived in England on August 13, 1969, and there was a League game against Southampton that night, with 32,000 there.  Soon after, we played Manchester United and it seemed like there was a 100,000 crowd, with George Best, Bobby Charlton and Denis Law playing – unbelievable!

“My room-mate was Duggie Devlin, who was from Scotland. We had to write things down to communicate!

“I started in the third team like everyone. It was a hard, physical league. In my first year, I was one of the top scorers, for the next two years as well. In my last two years there, I was in and out of the reserve league. The strikers at the time were John Richards, The Doog, Hugh Curran, Alan Sunderland to name a few, but they were the best four years of my life.”

Collins went on loan to Stafford Rangers in 1973, having played at Wembley in the indoor five-a-side tournament, then moved to Swindon Town for 1973-74 to link up again with what he called ‘the best coach ever.’

That lavish piece is aimed at former Molineux youth coach Gordon Eddlestone, who reportedly recommended Collins to Bill McGarry and was also credited with taking Colin Viljeon to Ipswich during the manager’s time at Portman Road.

“Why I say Gordon is the best is because of the amount of lads he made into first-team players, like Peter Eastoe, Steve Daley, Alan Sunderland, Barry Powell and Geoff Palmer,” Collins added.

“I played a few games for Swindon, then came back to South Africa with Micky Kent, an ex-Wolves lad, to play for PG Rangers. The PG ended up being a big part of my life because, for the last 35 years, I have worked for them. PG stands for Plate Glass, who are the biggest glass company in Africa.

“Part of the playing contract was that they would get you a job with the company. I have done it all with them for the last 35 years.

“I had offers to go to America and Australia and thought I would spend half a season with Rangers then go. But I had good offers to stay.

“I played 14 or 15 league games and three cup matches that season and scored 11 goals. They were in the bottom four when I joined. At the end of the season, we were fifth or sixth and got to the quarter-finals of the cup.

“We played Cape Town City, full of English ex-pros, and won 2-1. But it was bad news for Micky Kent. He scored a goal that only he could have scored and 20 minutes later broke his leg. A week later, he was on his way home. It was very sad for him and S.A. soccer because he was a great player.”

Collins puts his non-attendance of any of the World Cup games down to a combination of the high ticket prices and those damn vuvuzelas! But, having graduated into coaching and managing, he speaks fondly of his career in the game in his home country.

“After PG, I joined Germiston Callies and stayed for two years and was top goalscorer in both,” he added.

“My next club should have become the biggest in South Africa. They were Portuguese-controlled and called Lusitano. We won the league and cup – it was the last time it was played as the Castle Cup – and I scored the only goal in the final of what is basically their FA Cup.

“But I left them under a cloud, so did others, and went to the Manchester United of South Africa soccer, Highlands Park, where I again won league and cup honours before playing for a multi-racial side called Dynamos and scoring lots of goals. 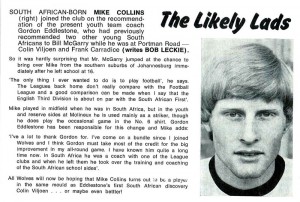 “In between all this, I played for South Africa against an English XI with Bobby Moore, who I think got sent off for the first time in his life. They were  getting on a bit and we won 3-1. I scored two. We played as well against Zimbabwe, who we beat 7-0 and I scored two.

“I went back to PG Rangers, stayed until I was 30-odd, then went back to being a amateur with the club I started with, Marist Brothers. I have now remarried and live in Cape Town, where I have done some more coaching.”

Wolves fans didn’t see much of Mike Collins but those in the republic certainly did.