Wilson And Robson – Much More Than Managerial Rivals 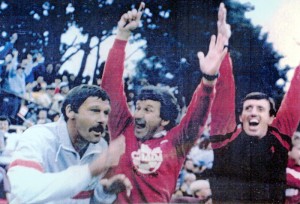 Les Wilson (centre) celebrates in 1985 as Canada reach a World Cup finals for the first and so far only time. On the left is coach Tony Waiters.

Managing Canada to their sole appearance in a World Cup finals was only part of the story for Les Wilson as far as Mexico 1986 was concerned.

Even before he set foot in Central America, the former Wolves utility man was bursting with pride thanks to a memorable meeting back in Europe.

“The draw was in Zurich and, while the groups were being compiled, I found myself sitting only a couple of seats from Sir Bobby Robson,” he said.

“I got talking to him and Bert Millichip and was delighted to hear that I was on the same flight as them back to London, where I had some business to attend to.

“You can imagine my delight when Bobby not only asked me if I wanted to accompany him to the Watford v Everton game on the night we got back but also reacted positively to my suggestion that England might come over to Canada for a friendly before the finals.

“They agreed to play us at the Swangard Stadium in Burnaby, just outside Vancouver, and didn’t ask for a fee or any expenses for doing so. That was virtually unheard of but they were just happy for us to put the money instead into our player and coaches development programmes across the country.

“I’m proud to have been able to regard Sir Bobby as a friend from then on and I continued to see him down the years, partly because one of my best mates in football, Bruce Twamley, worked successfully for the Canadian Soccer Association in a number of coaching roles after playing a few matches for Ipswich in the 1970s.

“As chance would have it, Bruce made his Ipswich debut under Sir Bobby at Molineux just after I’d moved to Bristol City and broke his leg in the game.

“But I’ve heard from him and other people that Sir Bobby actually tried to take me to Ipswich from Wolves. It must have been at a time when I was out of the side but players often didn’t get to hear about other clubs who may have been trying to sign them.”

Wilson, still resident in Vancouver after ending his 17-year stint with the Canadian FA in 2003, had encountered Robson many years earlier, not that the late England manager would have known it.

The youngster queued for his autograph and those of Ronnie Allen and a man who became  a close pal, David Burnside, when Albion played in Vancouver on a tour of North America and Canada in 1959. 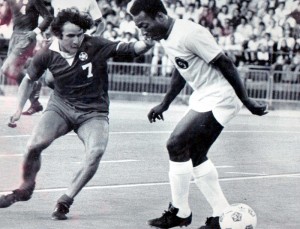 Wilson has proved himself a wonderful host to various Wolves friends down the decades – Burnside, Bobby Gould, Graham Hawkins, Bobby Thomson, scout Tony Penman and Gerry Taylor’s son and daughter-in-law all having stayed with him. And only this week, he and his wife Lois have the former Newcastle manager Richard Dinnis lodging with them.

At 63, Wilson considers himself ‘probably retired’, although he refuses to rule out the possibility of returning to the game if the right opportunity came up.

* An article about Wilson’s World Cup campaign with Canada in Mexico appears in the latest issue of the highly popular nostalgia football magazine, Backpass. Click on the publication’s icon on the right for further details.