Search On For Wednesbury Lad 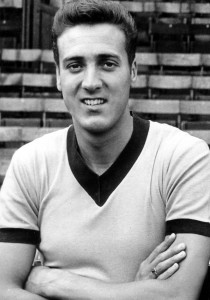 Wolves Heroes are busy trying to track down another former Molineux man with South African connections.

Black Country boy Johnny Kirkham is known to have joined Durban Spurs following his career in England and to have stayed in the republic after his playing days ended.

But, a few months short of his 70th birthday, he appears to have slipped out of contact even with some of the other Wolves stalwarts who opted to try their luck in South Africa.

If anyone is able to point us towards him, we would be delighted to hear from them at info@wolvesheroes.com or on 07734-440095 – as long, of course, as he is happy for his contact details to be passed on.

We understand John, who was born in Wednesbury, has been living in Durban in recent years – and it is thought he donated one of his kidneys to his son.

A member of the team who famously won the FA Youth Cup at Chelsea’s expense in 1957-58, he has been mentioned at various times on this website, in particular as a teenage friend of Alan Hinton’s.

He made his senior Wolves debut at the age of 18 in a 2-0 victory at Celtic on the night the Scottish giants switched their floodlights on for the first time and played his first League game five days later in a 3-2 win at home to Manchester United in October, 1959, when he marked Johnny Giles. The two games were watched by a total of 89,000.

He was following in the wake of some awesome Wolves wing-halves such as Billy Wright, Ron Flowers, Eddie Clamp and Bill Slater but continued to make a mark.

In 1960-61, he played ten first-team games and came up with his first goals for the side – one in a 6-1 slaughter of Chelsea at Molineux, one in a home win over Burnley and another in an FA Cup draw against Huddersfield.

But it was in 1961-62, in which he made 30 appearances and preceded a goal in a win at Manchester United with a brace that saw off Nottingham Forest three days earlier, that he became more established. 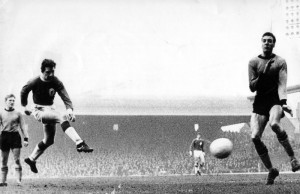 Kirkham, watched by Ken Knighton, tries to block a Chris Lawler shot at Liverpool in February, 1965.

Many of his outings were in the right-half role formerly occupied by Clamp and he had another long run the following season after reclaiming his place from Freddie Goodwin.

The last of Kirkham’s 112 senior appearances for the club (he scored 15 goals) came at home to Liverpool on the final day of the 1964-65 relegation season.

He was also an under-23 international and joined Peterborough before moving on to Exeter and non-League club Horwich RMI.