Travels And Travails Of ‘Honest’ Midfielder

California-based Charlie Bamforth speaks at length to another fellow US resident – one who was prepared to criss-cross Europe and England for little gain in pursuit of his chosen career. 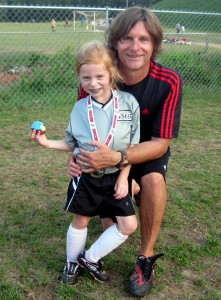 Perhaps it really was the right place but most decidedly it was the wrong time. And those who criticised Campbell Chapman mercilessly might ponder just how hard he tried to make it in the game.

He was born in Sutton in Ashfield in 1963, his father Sammy having been with Mansfield Town.

“But I was raised in Southbourne in West Sussex and played for the local village teams, travelling in the back of a mini-van to the likes of Bognor and Chichester,” he said.

“We had a good little team and I was being watched by scouts from Queens Park Rangers and Aston Villa. I went to QPR first, then to the Villa. I trialed there alongside the likes of Paul Birch, Noel Blake and Ivor Linton but they decided not to take me on.

“So I went back home to do my A levels. The games master at the school played for Waterlooville and I did the pre-season with them in the reserve team.

“Brighton invited me to go there at the time Alan Mullery was manager but I didn’t fancy it. They really didn’t seem to run their youth team properly.

“Peter Morris, who had played with my dad at Mansfield, invited me to go to Peterborough. I got on the train to Victoria and crossed London on the tube. I’ll be honest: I had no idea where the heck I was going.

“By the following Monday, I was in the reserve team and they invited me to sign as an apprentice. I was there for three years, the last year as a full-time professional.

“It was very tough. You trained with the first team and they kicked lumps out of you because they didn’t want you taking their place. In the lower divisions, it’s tough for young players unless you are a big strong defender.

“Me being ten stone and somebody trying to play football…..it wasn’t going to work in that cut-throat world. A few made it, though – people like Mickey Gynn and Trevor Quow. But, in the end, I concluded: ‘This really is not fun.’

“Then they scrapped their reserve and youth teams. I had a trial for Luton under David Pleat but there were too many players there, so I went non-League to Stamford Town and then March Town. Spit and sawdust stuff. The players were looking forward to the bar afterwards more than the game itself.

“By now, my dad was chief scout at Wolves and my brother Cavan was an apprentice at Molineux. It was the last place I wanted to be. I did not want people to say I had got there because of my connections.

“Dad asked me if I had thought about going abroad. I called Brendan Batson at the PFA and he gave me a bunch of numbers. The first ones were in Finland. I would call a number and some coach’s wife would answer. I would say: ‘Hi, I’m Campbell Chapman, professional footballer and…’ and they would mutter something in Finnish and put the phone down.

“Finally I called someone at the Finnish FA and they had literally just had a contract cancellation for an English player. ‘Can you score goals?’ ‘Sure’ I said. If they had asked if I could I keep goal, I would have said yes. ‘Can you come now?’ I said ‘of course’ and on the Monday a plane ticket was waiting for me at the airport.

“The club was KaIK, in the south of the country. They gave me a bike for transportation, a lunch in a restaurant and dinner at the hamburger van. But I was soon known locally. I was able at last to feel good about myself after being a nobody at Peterborough. It was great for the confidence.”

Coming back to England, Chapman signed for Bilston Town. “The guys at places like that are so honest, no big-time Charlies,” he added.

“It was back to basics but I knew that if I showed I was good enough, someone would find me. The guys at that level really try to help youngsters who they think might make it – to say that they had a hand in it.

“Shrewsbury came in and Chic Bates asked if I would like a trial, no money. I played a few games in the reserves. It was a good environment but everyone is trying to get away, not seeing themselves playing their whole careers there.

“I played a game at Stoke and, as I was leaving the dressing room, Wolves’ scout Tony Painter pulled me aside and told me Tommy Docherty had been there to watch me. He said they wanted me to join non-contract.

“I said I would but only if my dad had nothing to do with it and provided I would be treated like everybody else. They said Dad didn’t even know they were watching me. He was never in the dressing room at the time – always out and about scouting.”

Campbell Chapman’s first appearance in the Wolves first team was as a sub for Danny Crainie at Manchester City on December 29, 1984. His first touch was an accidental elbow in Mick McCarthy’s face. Picking himself up, the current Wolves manager said: ‘You do that again and I’ll……’ 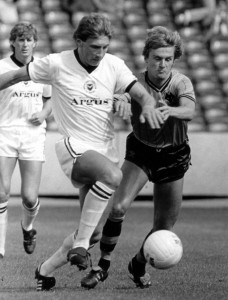 Chapman in action in Wolves' home game against Newport in 1985-86.

“The club was a mess. The Bhattis had pulled the plug. The Doc was just a figurehead manager, trying to put together a cheap and cheerful squad, and there were some reasonable players, like Andy King, who was very talented. The Doc wanted to play honest players. Okay, so maybe I wasn’t the greatest, but I certainly was honest.”

When Docherty left, Chapman Snr got the caretaker position.

“He put together a team with talent – the likes of David Barnes and Jon Purdie – but generally one of little experience. We were all on about ₤150 a week.”

Then the club brought back Bill McGarry as manager, “an interesting character” as Campbell says.

He was not what McGarry wanted and was dropped but was soon back in the team. The club were so different to what McGarry had left behind in 1976, so he didn’t stay long and Sammy Chapman was reinstated.

“He really did do a very good job of motivating us,” Campbell said. “He was so positive, always. And he signed some good players – Andy Mutch for instance.

“The facilities were disgusting – cockroaches in the bathroom, training ground with no grass, balls that were so hard that you might break your foot kicking them, only two sides of the ground open. Nobody could really tell when looking from the outside just what a disaster it was.

“The fans were never going to take to me. One bad game, one bad pass even. Dad and I both knew it wasn’t going to work. Several clubs made offers – Tranmere, Chesterfield, Bury and Burnley among them. But it was stuff like ₤100 a week, ₤30 extra if we won.

“I couldn’t make ends meet on that, what with lodging, the cheapest of cars and so on. I was flattered but…”

Then came a call from IFK Ostersund in Sweden. They were proposing ₤400 a week in cash. In half a year over there, Chapman would make as much as in a season in England.

“So I went and they made me feel like a million dollars. I was there for two seasons and, when I was back in England, John Rudge let me train at Port Vale.”

He then went to Crewe in November, 1986, sharing a club house with David Platt and starting a lifelong friendship. Platt would go on to play for England. Campbell Chapman? He would make a solitary appearance for Crewe as substitute in a 5-0 home defeat against Northampton.

“I went to Qatar for two months,” he recalls. “I flew out on New Year’s Eve. No alcohol, of course, so I was never fitter! They wanted me back in Sweden, at a time when I had signed non-contract with Reading, but I fancied trying the United States.

“I came over here to teach at camps in Dallas and got in contact with Gordon Jago at the Sidekicks. He was quite clear that the only way to succeed in the US would be to coach because the league could go belly-up tomorrow. I stayed for six weeks and loved it.

“Dad then told me that there was a club in Malta that fancied me – Birkakara. I stepped off the plane at 10pm and the guy meeting me said: ‘We are going straight to the club to meet the president and the manager’. I soon found myself down a back alley – the ‘club’ was a smoky downstairs den, with all these blokes drinking whisky and playing cards!

“We trained at the back of a school on concrete. There only was one grass pitch in Malta – the national stadium. All nine teams in the league played there, with two games on a Saturday and two on a Sunday, one side having a bye each week.

“Paul Mariner was there and told me that Brian Talbot at West Brom might be interested. So I went to The Hawthorns on trial and, after a game against Forest Reserves, they signed me for the rest of the year. I thought I did well but, come the season’s end, there was to be no contract.

“I went back to Finland but I was no longer enjoying it. It was not fun any more because it was so physical. I was counting the days off the calendar, which can’t be right. 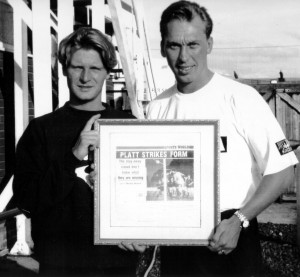 Friend of a star! A photo, taken at Willenhall Town, that was used in Peter Lansley's excellent Running With Wolves book.

“I came home to Bilston for ₤60 a week. But I got to enjoy my football again and then went to Willenhall as player-manager. By now, I was also in the bar business with David Platt – working 11 to 11.”

And so, in 1993, Campbell Chapman came to Atlanta to run GSA soccer camps. Finally, he ‘arrived’ and loves every minute of it as director of the girls’ programme.

He is happily married to Shannon, with two children Emma (5) and Luke (4). As Jerry Garcia sang: What a long strange trip it’s been.