So crammed with gems was Charlie Bamforth’s notebook after he interviewed Jimmy Melia several months back that we decided to use his article in three parts. Here is the final instalment from our prolific contributor in California….. 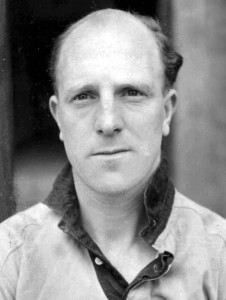 Stan Cullis.....had a promotion in mind for another balding member of the Molineux staff.

He intended to add him to his coaching staff but destiny was thwarted by the great man’s sacking in September, 1964. Yet he was still instrumental in launching Melia on his own managerial career.

“Stan was at Birmingham in the late 1960s and recommended me to Aldershot (where Cullis had played in the war years) as player-manager,” Melia revealed.

“Then I was at Crewe for four years, including a spell as manager – anyone who stays there that long needed a knighthood.”

I pointed out the length of tenure of Dario Gradi at Gresty Road and Jimmy, who rose to the rank of captain during his Molineux stay, roared with laughter.

There was time enough at Crewe for the older occupant to guide the fortunes of several former Wolves youngsters, notably former England schoolboy international Geoff Crudgington, gangly centre-half Phil Nicholls and full- back Alan Stephens, a Scouser like Melia.

The high spot of his managerial career, though, must have been when he took Brighton and Hove Albion to the FA Cup final in 1983.

“I took over from Mike Bailey,” he added. “We struggled in the League but really got playing in the Cup games.

“In the third round, we drew with Newcastle at the Goldstone. Keegan was playing for them. In the replay, they had two goals disallowed and we won 1-0. The fans at St James’s were going mad!

“Our reward was a tie against Manchester City, who were fifth in the top division, and we beat them 4-0. And then what a draw! Liverpool at Anfield.

“It was the only game on that Sunday and we won 2-1. Then we beat Norwich in the sixth round and Sheffield Wednesday in the semi-final at Highbury.”

And so to the final against Manchester United, to which the Brighton team travelled by helicopter?

“Sure, we could have won it. Did you know that Gordon Smith (who missed that golden chance at the death in the first game) is now president of the Scottish Football Association? But you never look back. You must look forward.”

It was around the time of his Wembley visit that Melia became famed for  those white shoes….

“I was dating a younger woman and she liked to dance,” he said. “She gave them to me and suddenly everybody is wearing them!”

Jimmy was never appointed permanent manager at the Goldstone and was disenchanted when the chairman brought in Chris Cattlin behind his back. So it was onto Portugal, where he had great success with Wolves’ 1970s UEFA Cup adversaries Belenenses, taking them to a top-five place in his four years there.

Back in 1978, Melia, who now works in coaching in Dallas, had his first US experience, working alongside ex-Wolf cub Laurie Calloway at South California Lazers.

“He was a young professional when I played at Molineux. Later, I wanted him as my assistant at Brighton but it didn’t happen.” 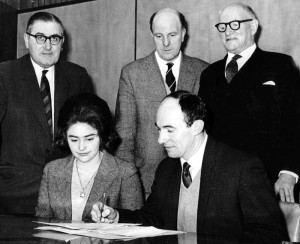 Jimmy Melia signs at Molineux in 1964, watched by his wife and (from left) Wolves general manager Jack Howley, Cullis and director Jim Marshall.

There is yet another strong link between Wolves and Jimmy Melia – coach Terry Connor, who has served Colin Lee, John Ward, Dave Jones, Glenn Hoddle and Mick McCarthy in more than a decade at Molineux.

“Terry played for me at Brighton,” he added. “I watched him at Leeds and liked him a lot because he had great energy and so much movement.

“Andy Ritchie was not very happy at the Goldstone, so we did a swap deal. He had a great attitude, Terry. I bet he is a fine coach.”

Wolves Heroes reader Phil McCrudden contacted us to say: “When Jimmy Melia was at Crewe, I met him many times on my way home to Liverpool from Wolves evening fixtures in the early 70s. He picked up the train at Crewe and obviously remained a great Wolves fan with great regard for the club. He always used to ask me for a report of the game I had just attended and was a very nice guy.”