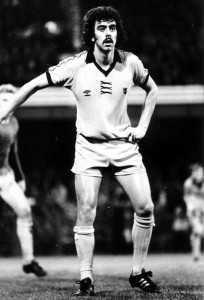 Geoff Palmer.....on patrol duty of a different kind at the Baseball Ground.

Geoff Palmer has carried out his intention to retire from the police by calling time on his service with the force after more than 23 years.

At 56, the Cannock-born former full-back hesitates to say he will not work again, but told us: “If I do, it will probably only be a little driving or courier job.

“I’ve had friends from the force saying some of the winter days can be long but I’m enjoying playing more golf at the moment and the garden is certainly looking better.”

Palmer reports regularly seeing another ex-Wolves defender, Alf Crook, on the fairways at his club, Oxley Park. The 86-year-old, who made only two senior appearances while at Molineux, gets about the course these days on a buggy.

Andy Sinton isn’t the only one-time Molineux man about to embark on his first full season with a new non-League club.

Adrian Williams is now manager of Bedford Town and kept them in the Zamaretto Southern League premier division following his appointment late in 2009-10.

Williams’ charges have a friendly at home to Charlton tonight after their 1-0 defeat against Luton at the weekend.

Sinton, meanwhile, who had a lengthy and successful earlier stint with Fleet Town in the Ryman League South, has given trials to two ex Wolves youngsters, Kyle Bennett and Matt Bailey, since going in as boss of AFC Telford. He has also offered terms to Lee Naylor’s brother Martin, who has had two previous spells at the Bucks Head.

A Wolves side visit Telford for a friendly on Tuesday, August 10.

Double Header For All Stars

Wolves All Stars have put two more fixtures on their schedule. They play Albrighton at Loak Road on Sunday, August 22 (3pm) in a game in aid of the Cosford-based County Air Ambulance.

And they face Wulfrunians All Stars at Castlecroft Stadium on Sunday, September 5 (3pm), with Compton Hospice as chief beneficiaries.

It seems we caught up with John Humphrey just in time when we featured him at some length on these pages just before the end of last season. 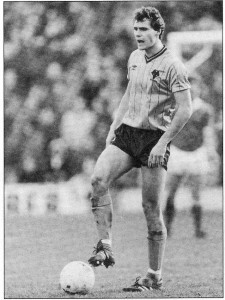 He has since chosen to end his stint at the prestigious Whitgift Public School in Croydon and accept a teaching post elsewhere – a switch that means he also has to curtail his work as a part-time coach at Charlton Athletic.

The 49-year-old early 1980s full-back was a three-time Player of the Year at The Valley, where academy manager Steve Gritt said: “John has been an excellent coach and we’re sorry to see him leave. He has a huge amount of respect among the boys.”