Ernie, The Wonder Of Waggy & Frank – And A Sad Case!

Conducting the second part of my interview with Mike was more difficult than I imagined. Considering he is supposed to be retired, he is out and about more than many of my friends who work full-time. Mind you, he does enjoy his golf and, when I eventually tracked him down, he admitted he spends a lot of his time out on the course. And who can blame him? So, it was 8.30 one morning when I pinned him down – and he exercised his skipper’s preroragative to tell me to get a move on as he was teeing off at 10am! 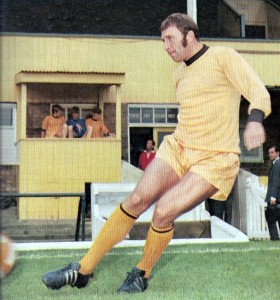 A reassuring Molineux sight for a decade……

Q: Mike, a lot has been said about the gulf in standards between today’s Premier League and the First Division in your day, ie that the football is faster and the players more skilful and fit. On the other hand, you played with heavier balls and boots, and the pitches were terrible. Do you subscribe to this view? Would Wolves circa 1971-74 hold their own in the Premier League now? (From Singwolf_1)

A: Our team of the 70s would definitely hold their own given today’s training standards and the modern-day pitches. John, you know better than anybody, they’re like billiard tables, absolutely beautiful. The players nowadays don’t even have to look at a ball coming to their feet and can play a lot of one-touch football. We had to keep our eye on it in case it bobbled. Even their training grounds are superb. In a lot of cases, they are exactly the same construction as the main stadium pitch – same size, same surface. We used to train at all sorts of venues with different surfaces – at the racecourse, at Castlecroft, all over the place. Sometimes, the day before games, we’d even train on the redgra surface at Castlecroft and we would also train and play on frozen pitches. They now have fantastic indoor arenas. It has all moved on, for the better I have to say. I watched the Brian Clough film on the TV. What was that Derby County pitch like! It was unplayable. If you had a ball at your feet and pushed it forward, you ran past it. It was difficult to pick your feet up. Pass-backs to the keeper were a nightmare – you just daren’t risk them.

Q: What is the best ever performance by the team in your time? (I loved the 3-1 win at United, because we were so absolutely and completely the best side.) (From BostonWolf)

A: I’ve got two. One is obviously the 1974 League Cup final. I thought we played really well on the day. But I felt our best ever performance was against the Portuguese side, Porto, in the UEFA cup. If you remember, we lost 4-1 away when John McAlle scored a fantastic 40-yard own goal. Porto were a top team and played really well against us. I scored our goal. But, when we got them back to Molineux around the November time, the pitch was a bit greasy and I thought we played our best ever football. We were 3-0 up at half-time and paralysed them again in the second half but couldn’t get that fourth goal. They scored in the last minute when they hit a low corner which squeezed in at our near post. If we had kept it at 3-0, we would have gone through on the away goals rule. I thought the passing and movement that night was fabulous, we just cut them to ribbons.

Q: Curran or Gould? Which one was better in your view? (From BostonWolf)

A: They were different types of player. For a start, Bobby was right-footed and Hughie left-footed. Bobby was an all-action player, always a nuisance, chasing people. He worked extremely hard and could score goals. Hughie was better in the air, a fantastic header of the ball. He was a hard player who took a lot of knocks, a great front man. Both were good top-flight players.

Q: Any idea why Derek Jefferson was never the player at Wolves that he had been at Ipswich? (From BostonWolf and jayeff17) 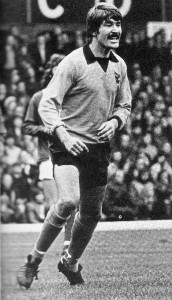 Derek Jefferson – struggled at Molineux to live up to his Ipswich billing.

A: Derek had been at Ipswich with McGarry and done well but I think he was slightly out of his depth with the type of players we had. Ipswich had some good players but they didn’t have the level of quality we had. Derek was happy at that level but found it difficult against higher-level players. He was an out-and-out defender who could destroy rather than being someone who could use the ball when he had it at his feet.

Q: Tell me about Ernie Hunt. You were good pals with him (From JR). How successful was the restaurant you opened with Ernie Hunt? (From Charlie Bamforth)

A: Ernie was a great pal. Not only was he a great character in the dressing room but he could play. I met him through the England under-23s who paired us as room-mates, and I got to know him very well. We had a great understanding on the pitch. I could always find him with the ball. I knew just where he’d be. And likewise, he knew where I was, and we knew what each other was going to do. At free-kicks, he just kept an eye open, gave a little move and he knew what was going to come. We did have a little restaurant business together, the Savoury Duck in Birmingham. We had the same accountant who suggested we buy this. It wasn’t our best decision. We kept it for a couple of years, then Ernie was transferred to Everton and we got rid of it.

Q: Wolves now have wingers Kightly and Jarvis – how do they compare with Dave Wagstaffe and Terry Wharton? (From Astraltrader)

A: In my opinion, Waggy and Wharty were more in the class of Hancocks and Mullen. They were at that sort of level, compared to the lads of today. Both of them played at the top level for many years. Wharty was a quality player, who scored a lot of goals. I would describe him as a very good wide player. But Waggy was in a different class. He would have gone on to the top level and been an international if it hadn’t been for his nerves. As you know, he smoked to calm him. Defenders hated him. He was that good and could have been even better but didn’t have the confidence in himself.

Q: If you could take two of your Wolves team-mates into the 2010-11 Premiership, who would they be – and where do you think the team would finish in the league? (From OLDGOLD) 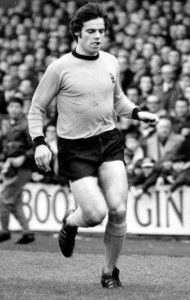 The versatile and awesome Frank Munro.

A: You were a prolific goalscorer and Frank could play anywhere. He was quality, a pure footballer. He had great feet, he read the game very well and he was always in position. He was a natural footballer. He could have played up front, on the wing, in midfield, anywhere. I’m not sure though that the two of you would make that much difference to today’s team. They would need a lot more players to make an impact when you consider the size of the top teams’ squads. We got by with about 14 or 15 first-team players. Nowadays, you are looking at squads of 20-plus first-team players.

Q: Mike, you are seen as one of the best captains ever to lead Wolves. What do you think makes a good captain and what specific qualities do you feel you brought to the role? What extra responsibilities towards your team-mates did you have as captain, both on and off the field? (From Mutchy)

A: First and foremost, the captain has to lead. I was a talker. You need to communicate with players and I strongly believe the captain should be a midfielder. You have to be able to get everywhere. I know the Spain captain was the goalkeeper but how is he going to speak to the centre-forward if he wants him to do something differently? It’s ok when things are going well but you need to pick things out when they are going wrong. I remember in the League Cup final, in the second half when we were under pressure just after we had conceded the goal, we were hitting too many long balls to you and Doog and they kept coming back at us, whereas in the first half we were knocking it about and building up. In the end, I had to go and take the ball myself and start keeping it. It’s things like that a midfielder can get into and sort out. You’re near enough to be able to speak to everyone all over the pitch.

Q: You had a very long throw in….did you practise it and was it a pre-planned tactic against certain opposition because you did not overuse it? (From FMM)

A: It wasn’t a long throw-in compared with some of those nowadays. The ball was different but we had the ability and freedom to improvise at throw-ins and free-kicks. We had some set plays but were able to do what we felt was right at the time. I remember when we played Leicester, we had a throw-in and Kenny Hibbitt had the ball. I jogged towards him as if to take the throw-in but their full-back turned away, so I went past him down the line. Kenny threw the ball to me and I knocked into the near post, where you scored. We had that freedom to play it as we saw it. We had plans but we could do something different when it was on.

Q: Did you break your foot before hitting a scorching 25-yarder that put paid to Manchester United in the Cup or was it after you scored? I can’t remember after all this time. (From Wolvesman)

A: I can’t recall the goal but I can remember the injury. Bobby Charlton stood on my foot when I went into a tackle with him. We’d already scored. The injury was in the first half and the lads had to play on without me. I was in hospital when I heard that we had won 1-0.

Q: I guess Wisbech, where you were born, is a bit of a football backwater. Did you support a team when growing up there? (From Charlie Bamforth)

A: It was during the war. My dad was in the Army – I think he was in India. So, my mum was evacuated from Great Yarmouth to Wisbech. It’s funny how things work out. I couldn’t understand the sense of it because they were evacuating the London people to Norfolk. That’s how I came to be born in Wisbech. It was two years before the end of the war. Afterwards, we moved back to Great Yarmouth. My dad’s favourite team were Tottenham, so I used to support them. But, locally, Norwich have always been my team. They were the first professional team I saw, Norwich at Carrow Road. 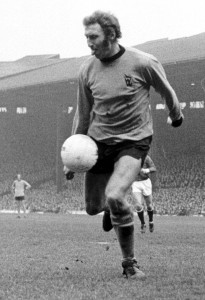 The scourge of Manchester United.

Q: Didn’t you ‘room’ with the coach driver? And was McGarry’s disappearing suitcase really an accident? (From Adrian Monk)

A: I never shared rooms with the coach driver, Sid Kipping. He was a fantastic character and great with the lads. Ernie used to put his hands over Sid’s eyes while he was driving. When I think back, it was so dangerous. Fortunately, there weren’t as many vehicles on the road in those days. About Bill McGarry’s suitcase…..Sid actually reversed the coach over it! We were at the hotel in Droitwich Spa when somebody got the cases out of the back and McGarry’s was left behind the coach. Sid ran over it and, as you can imagine, Bill wasn’t too pleased. We had some good times!

* Wolves Heroes extend their usual thanks to Molineux Mix for their assistance in making this lengthy feature possible.