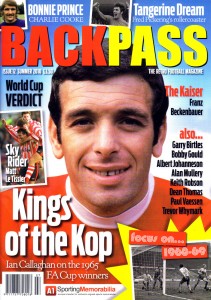 A retro football magazine that has already featured a host of former Wolves players is to increase its output during the new season.

Backpass, which is produced from an office in Herefordshire, has existed for its first three years as a quarterly but will now appear on the shelves every other month.

In addition, fans who have latched on to the product in fairly recent times will soon be able to catch up on sold-out earlier issues thanks to the publishers’ decision to reprint.

And the newly-published issue 12 contains a three-page article on Bobby Gould, centred on the autobiography that Wolves Heroes’ sister company Thomas Publications are bringing out with him this autumn.

Gould had two prolific spells with Wolves in the 1970s, totalling 39 goals in 93 League and cup games for them.

Other Wolves-related pieces to have appeared in past issues of Backpass are obituaries on Mark Kendall, Bill Shorthouse, Jimmy Murray, Paul Birch, Bobby Thomson and David Burnside. 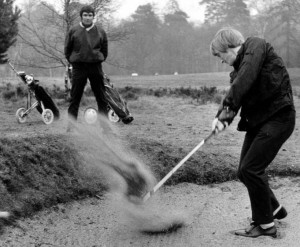 It's just not football! Bobby Gould watches his Molineux team-mate Derek Parkin effect a rescue act on the golf course.

The magazine is on sale in most branches of WH Smith, McColl’s and Martin’s. Alternatively, interested parties can click on the icon in the adverts section on the right-hand side of this page to learn more about the subscription and ordering arrangements.