Go-Between Was In Place To Set Up Deal 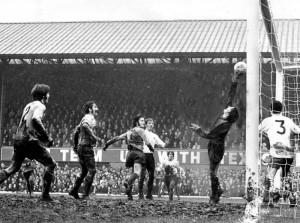 A distant Mike Bailey watches Wolves attacking in the Baseball Ground mud. He could conceivably have been playing against them for Derby.

A book claims that Mike Bailey’s huge influence at Molineux – as profiled at length recently on this website – might have been greatly reduced if Brian Clough had followed up his interest in the midfielder.

The publication claims that the long-time Wolves skipper was not only lined up as a Derby County transfer target but also that the author was deployed to oil the wheels of an approach.

Retired journalist George Edwards reveals in ‘Right Place Right Time; The Inside Story of Clough’s Derby Days’ that he was told by the manager to get hold of Bailey’s contact details.

Happily, though, for Wolves, this was one link Clough and Peter Taylor did not pursue, and Bailey remained in the West Midlands rather than be tempted to the east of the patch.

Edwards writes: “I had no idea what Brian and Peter thought of Bailey but every time he had played against Derby he was brilliant, dominating midfield completely. Nobody was very surprised when Wolves paid Charlton Athletic £40,000 for him in 1966.”

Then comes the recollection that reminds us how the managerial duo weren’t afraid of trying the occasional under-hand tactic in pursuit of their man.

“Urged by Clough to get Bailey’s telephone number as quickly as possible – another illegal tapping obviously on the way – I duly did so. But I never heard anything more, so obviously nothing came of this one.”

Clough and Taylor later had huge reason to be grateful to Wolves, even though their Nottingham Forest team were denied by them at Wembley in 1980 as they chased another League Cup triumph.

It was Bill McGarry’s side’s famous victory over Leeds in May, 1972, that unexpectedly took the League title to the Baseball Ground while Derby’s players were on an end-of-season holiday in Majorca.

And, having switched to the City Ground a few years later, the duo were celebrating again after Wolves won at Burnden Park on the last day of 1976-77 and so sent Forest up instead of Ian Greaves’s Bolton.

Without that result – secured by a Kenny Hibbitt goal – it would have been impossible for Forest to win the 1977-78 League Championship or the 1978-79 European Cup! 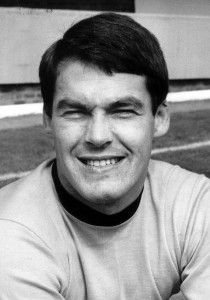 Stepping empty-handed aboard the team coach for an away game, the ex-Wolves striker was addressed by Clough with an enquiry as to the whereabouts of his overnight belongings.

Wignall’s response was to put his hand in his inside jacket pocket and, to the amusement of his colleagues, produce a toothbrush which he ‘brandished flamboyantly.’