Molineux Memories Of The Other Phil Parkes

A man not to be confused with Lofty.

What are the chances of two goalkeepers of the same name and from the same neck of the woods each playing hundreds of games in League football?

A darned sight less than the likelihood that someone, somewhere would get them mixed up!

“Yes, I’ve been asked if I’m the guy who played all those matches for Wolves,” says the other Phil Parkes.

“I suppose I’ve still got some Black Country in my accent, so it might be an easy mistake to make but I tell people it’s Lofty they’re talking about, not me.

“I played against Wolves many times in my career but never for them.”

That said, the Phil Parkes who followed a 60-game stint with Walsall by playing 344 League matches for both QPR and West Ham, had a big thing himself about Wolves in his younger years and might have caused some real confusion among Wanderers supporters had his career taken another path. 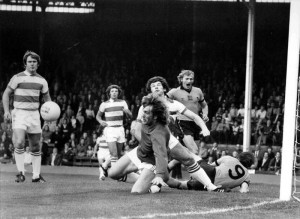 Back on his home 'patch' - Parkes jousting with match winner John Richards and Steve Kindon on behalf of QPR at Molineux in 1977.

As a boyhood Wolves fan, it was always likely, after all, that opportunity might first knock for him at Molineux.

“I’m from Sedgley and played as a 16-year-old in their fourth team and was offered terms by them,” said the man who celebrates his 59th birthday today.

“That was great for me because I used to go to lots of matches at Molineux – to watch the first team one Saturday and the reserves the next.

“But they had so many keepers. I think it was four senior keepers and four amateurs, so I thought I would have more chance of getting on at Walsall. And the rest is history.” 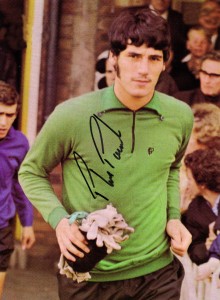 While West Bromwich-born Lofty was losing his first-team place to Alan Boswell and soon regaining it, his namesake was making his debut for the Saddlers in 1968-69 and not only kept his spot but earned a move to QPR in 1970.

Having picked up his solitary England cap in 1974, he became the world’s costliest keeper by joining West Ham in 1979 for £565,000 and won the FA Cup with them the following year.

This ‘other’ Parkes now works as an ambassador for West Ham and was on duty as an MC when Wolves won at Upton Park in March.