Seasons That Started In Style

Some Curtain-Raiser Conquests To Stir Us

To get us all in the mood for the start of the new season, how about these ten memorable opening-day successes from Wolves’ past?

Read and relive, then look forward to Saturday’s Molineux clash against Stoke with just a little more confidence….. 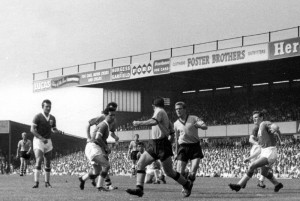 1. Birmingham 0 Wolves 1 (1959-60):  Bobby Mason’s shot does the trick for Wolves on a day when they kick off as champions of England for the last time. It is the club’s third win at St Andrew’s in three years.

2. Wolves 8 Manchester City 1 (1962-63): What we would give for this result now! Goals by Ted Farmer (4), Jimmy Murray (2), Terry Wharton and Alan Hinton devastate City, who have Bert Trautmann in goal and a young Dave Wagstaffe as their lone scorer.

4. Fulham 1 Wolves 2 (1967-68): Wolves mark their return to the top flight with a win, achieved by goals from skipper Mike Bailey and Derek Dougan. Over 52,000 were at the first home game, against Albion, four nights later.

5. Wolves 3 Norwich 1 (1973-74): Bill McGarry’s side kick off their League Cup winning season with victory over the team they beat in the semi-final of the competition. Derek Dougan (2) and Jim McCalliog secure the points.

6. Derby 0 Wolves 1 (1979-80): The launch of another campaign full of happy League Cup memories. Wayne Clarke scores at the Baseball Ground, Molineux has a huge new stand and Andy Gray is about to be signed. 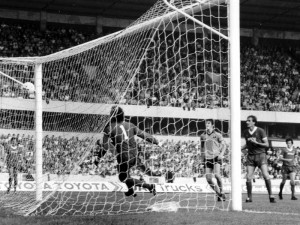 Bruce Grobbelaar is memorably beaten by Mick Matthews on kick-off day of 1981-82.

7. Wolves 1 Liverpool 0 (1981-82): Mick Matthews lobs Bruce Grobbelaar to give Wolves what still stands as their most recent top-flight opening-day victory. Two years later, the sides drew 1-1 on the first day.

8. Wolves 2 Blackburn 1 (1982-83): Survival euphoria is still in the air as Wolves hit back from one down in this Division Two opener with two Mel Eves goals.  Derek Dougan, hailed as the club’s saviour, is lifted shoulder-high from his South Bank vantage point.

9. Watford 0 Wolves 2 (1991-92): On the afternoon Lawrie Madden makes his debut, a nine-year wait for an opening-day Wolves success is ended by second-half goals by the renowned double act of Andy Mutch and Steve Bull.

10. Wolves 3 Bristol City 1 (1993-94): Two Steve Bull goals and one by Derek Mountfield lift the fans off their seats on the day the Billy Wright Stand is used for the first time. Wolves can even cope without the sent-off Mark Venus.