Cullis The Top Man By Far 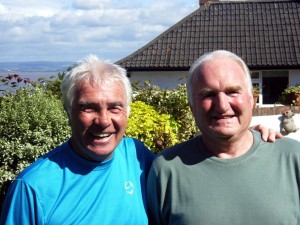 Ken Knighton (right) with his near neighbour Bobby Gould.

In a playing career spanning six clubs and the best part of two decades, Ken Knighton had his fair share of managers.

But he has no hesitation in naming Stan Cullis, his first boss at Wolverhampton Wanderers, as the best of the lot.

He recalls: “There was a sign on the dressing room wall at Molineux that said: ‘Manners Maketh Man.’

“We all know what a brilliant manager he must have been to lead Wolves to all those trophies but he was also very big on doing things right.

“The best advice any manager ever gave me was him saying we should have respect for everything we do – respect for our team-mates, our opponents and ourselves.

“I was a teenager when I heard that and I’ve never forgotten it. Not that anyone would want to step out of line with him.

“We used to hear his hob-nail shoes coming down that long corridor towards the dressing room at Wolves and the place would go silent!”

Knighton’s Molineux career was restricted to 16 first-team appearances as a wing-half or right-back in the mid-1960s and it was at Oldham, Preston, Blackburn, Hull and Sheffield Wednesday that he flourished in senior football.

But he was far from finished at that and made boyhood Wolves fan Sam Allardyce one of his signings after becoming Sunderland’s youngest ever manager.

At Roker Park, he oversaw the winning of promotion back to the top flight, only to then suffer a dip in fortunes that revived a link with his Molineux past.

“I’d received a telegram of congratulation in 1980 from Wolves when I took Sunderland up,” he added

“Then, when I was having a difficult time with my chairman, I had a letter from Stan Cullis out of the blue. 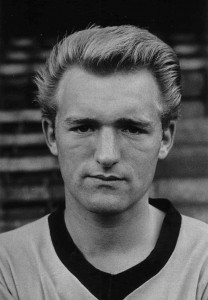 Ken Knighton in his Wolves days.

“He had long since retired as a manager but took it on himself to offer me a few thoughts from experiences he might have had.

“His letter was so full of great advice and I kept it for posterity.”

Knighton, now 66 and living just round the corner from Bobby Gould in Portishead, has another connection with the Bristol area in which he has been resident for around 25 years.