Winger Lutton Back In Town 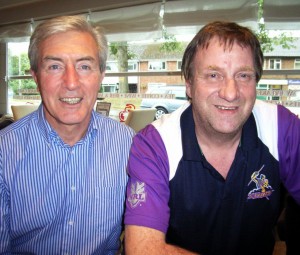 Together again.....John Richards and Bertie Lutton.

They were room-mates when they toured Zambia and Malawi as teenagers with a Wolves age-group squad, incurred the wrath of Bill McGarry on an Anglo Italian Cup trip and played a handful of first-team games together.

But Bertie Lutton and John Richards hadn’t seen each other for 37 years since being in opposite camps in an England v Northern Ireland Home International clash at Goodison Park.

That was until Wolves Heroes brought them together from their opposite sides of the world for a nostalgic reunion on Thursday.

They had a bit of catching-up to do over a cappuchino or two at Cafe Latuskes in Finchfield, a few miles from Molineux, and the memories soon flowed.

“I was on the bench for that international at Goodison,” said Lutton, a former winger who is over from Australia and now in Gibraltar ready for his son Lee’s wedding there next weekend.

“I remember chatting to John, who was in the England side, but never saw him again. I was at West Ham by then and for some reason didn’t ever play against my former clubs.

“I didn’t face Wolves with West Ham – nor play against either of them when I was at Brighton in between – but would have loved to go back and play again at Molineux.”

Lutton, who made 25 Wolves first-team appearances, now lives in Melbourne and is also including a visit to family in his birthplace, Banbridge near Belfast, on his latest trip to Britain.

His participation in Italy, where he and Richards fell foul of McGarry by sleeping in following a night out, might well have been preceded by a longer jaunt with a squad with whom he made his League debut in a 3-1 home victory over Manchester City in April, 1969.

“I thought I was going to the tournament in the USA in 1969 – and had my eyes on paying for my wedding with that,” he added.

“The lads received 30 dollars a day as a food allowance and that would have come in handy. But I wasn’t selected in the end. 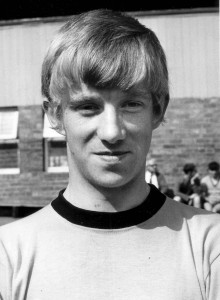 Bertie as a youngster at Molineux.

“When we did marry, I played for Northern Ireland on the Tuesday night, came back for the service on the Wednesday and then returned to the squad for the next game.”

Richards, co-owner of this website, spoke to Lutton during a trip to visit his daughter in Melbourne earlier this year and the two plan another meeting when he and his wife Pam go back in future.

There was another Molineux connection to that 1973 England v Northern Ireland clash. Although Derek Dougan was absent, the Irish goal came from a penalty by David Clements, who had been on Wolves’ staff in the early and mid 1960s.