Kenny Hibbitt, who scored all four Wolves goals against Newcastle 36 years ago today, marks the anniversary by heading to Molineux for the Premier League clash of the clubs on Saturday.

A decade and a half before Steve Bull performed the same feat at St James’ Park, Hibbitt produced his one-man blitz for the League Cup holders on August 24, 1974 – against a side containing his brother Terry.

And he expects to bump into old friends, as usual, when he attends the weekend clash in his role as a Premier League referees’ assessor.

“That game, for me, is right up there with the two League Cup finals,” Hibbitt told us today.

“I’m just sorry that there’s no TV footage of it. I have got some photos of the goals but not many games were televised in those days.

“I remember our kid coming up to me at the end and saying: ‘I’m gutted that we’ve lost but, if we had to, I’m glad you scored them all.’ Then he rounded it off by calling me a little bleeder!

“The icing on the cake was the shot I scored with from outside the area to seal our 4-2 win because it had been a bit nervous at 3-2.”

Hibbitt, whose second goal had come from a penalty, had been part of a double family celebration in the same fixture two seasons earlier when he and Terry scored in a 1-1 Molineux draw.

“That pleased our mum because she used to have one scarf on her left shoulder and the other on her right,” Kenny added. 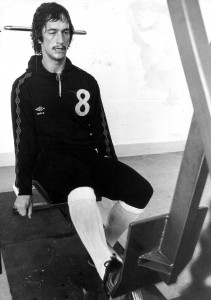 Kenny Hibbitt in a battle for fitness at Molineux.

“She never favoured one of us above the other, so she was in a right state when she knew one of us was going to be relegated at the end of 1975-76. Unfortunately, it was me and Terry stayed up with Birmingham.

“I’ve already been to Sunderland and Stoke this season but went to Wolves nine or ten times last season and obviously enjoy me trips there.

“I see Bully regularly at Wolves games and he dragged me into an executive box to meet Derek Parkin and Mike Bailey at one of them.”

Hibbitt was approached by Bill McGarry, then in charge at St James’ Park, about going to Newcastle in the late 1970s.