When The Current ‘In’ Score Was Racked Up By Half-time 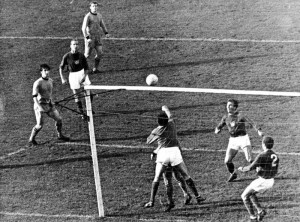 Hugh McIlmoyle (left) and Terry Wharton look on as Pompey survive this threat to their goal at Molineux in November, 1965.

Mind-blowing though the recent flurry of 6-0 wins by Premier League clubs have been, they have to play second fiddle to a memorable game at Molineux 45 seasons ago.

Because 6-0 was the score at half-time, not full-time, when Wolves took on Portsmouth in a Second Division fixture on November 27, 1965.

It was 3-0 after 11 minutes, five after half an hour and 8-2 by the end. Ronnie Allen’s side actually scored nine but, unfortunately, the one from full-back Joe Wilson was at the wrong end.

It was a happy afternoon, in particular, for Bobby Woodruff, the inside-forward whose last appearance in the side had been more than two months earlier in the 9-3 defeat at Southampton.

Despite scoring at The Dell, he had immediately lost his place and then been placed on the transfer list, only to subsequently have his name removed from it in time for his recall against opponents who would finish in mid-table.

Woodruff’s return to favour came somewhat controversially at the expense of crowd favourite Peter Knowles, who had already scored 15 goals that season, including Molineux hat-tricks against Carlisle and Derby.

No-one, perhaps except Knowles himself, could accuse Allen of getting it wrong, though, as Wolves tore into poor Pompey and scored through Woodruff in the second and 30th minutes and Dave Wagstaffe, Hugh McIlmoyle and Ron Flowers in between.

No 6 came four minutes before the break from John Holsgrove, who then made it 7-0 in the 57th minute, only for Pompey to pull one back straightaway through Wilson’s own goal.

The second half was actually ‘drawn’ 2-2, with Ray Hiron further reducing the arrears and McIlmoyle rounding off the scoring in the last minute.

Goals came very easily to Wolves in that, their first season following relegation from the top flight. Their total of 87 in 42 League games was the division’s highest and they added ten more in only three FA Cup games. 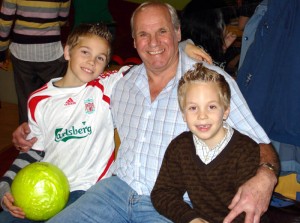 Alas, a 2-0 defeat at Portsmouth near the end of the season helped confirm they wouldn’t be going straight back up – with their tally of 61 goals against the main reason.

So Arsenal, Chelsea, Newcastle and Fulham – all of them six-hitters already this term – be warned!

* The last time Wolves won a League game 6-0 was at home to Gillingham in March, 2003. The last time they recorded a win by that score in the top flight was against Portsmouth in October, 1956, although the several bigger wins they have had in the meantime included one of 7-0 against Pompey in 1958-59.