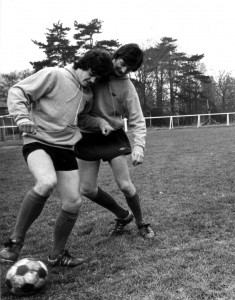 Wayne Clarke (right) goes into the tackle at Castlecroft with Frank Munro.

A host of ex-Wolves players are pencilled in for appearances at next Sunday’s (September 5) nostalgic reunion at Castlecroft.

The switch of the club’s long-time former training ground back to football use from rugby union is being marked by a match between Wolves All Stars and AFC Wulfrunians (kick-off 3pm).

But, in addition to those players actually lacing up their boots, many others aim to be present to swell the turn-out on a day from which proceeds will be going to both Compton Hospice and Geoff Palmer’s son Steve, a former Wulfrunians player.

Wolves Heroes co-owner John Richards reacted with surprise to the realisation that he features on the brilliant new opening sequence to BBC’s Match of the Day.

“A friend texted me on the first day of the season to say I was shown,” Richards said.  “I saw it myself on Match of the Day 2 the following night and thought it would be an idea to show it to our two-year-old grandson, Oscar.

“But he soon lost interest when he saw this dark-haired figure on the screen. That isn’t the granddad he knows!”

Wolves Winger Was An Accessory Pioneer

Les Mynard made relatively minor waves in the grand Wolverhampton Wanderers scheme of things but has one claim to fame.

The winger, who played three League games for the club (all in 1947-48), is believed to be the first footballer to have played in contact lenses.

His thrill at making it into the first team for successive games against Huddersfield, Chelsea and Everton while Jimmy Mullen was absent was intensified by the fact he was a huge Wolves fan, from Bewdley. 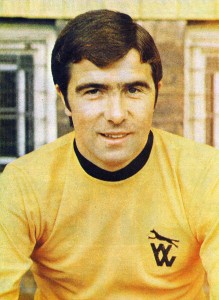 Another Wolves ‘angle’ has been added to the forthcoming autobiography of former Wolves striker Bobby Gould.

A moving foreword for the 272-page publication has this weekend been penned by Bob Wilson OBE, the long-serving Arsenal keeper who also briefly played for Stan Cullis’s Wolves reserve side as an amateur.

Wilson is the striker’s best mate in the game from their time together at Highbury, although that didn’t stop him getting a buffeting from Wanderers’ no 9 in the meeting of the clubs in North London in December, 1970.

’24 Carat Gould’ is due out on October 7 and is ghost-written by David Instone, with production duties taken on by Wolves Heroes’ sister company, Thomas Publications.

The book contains two chapters on the 64-year-old’s successful spells at Molineux and has already impressed Fleet Street veterans with its revelations and humour content.